Meat Loaf – Hell in a Handbasket 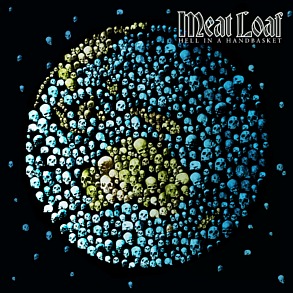 When you decide to listen to a Meat Loaf album, you have a pretty good idea about what you’ll hear: the musical equivalent of the emotion surrounding a Braveheart battle scene, the schmaltz of a Vegas floor show, and the power of an oil tanker explosion all combined together in the vocal chords of a single large man. It’s either something you pump your fist for or something you avoid and dismiss as kitschy. No matter which side you’re on, you can’t deny the power of Meat Loaf’s voice or his rightful place as King of the Anthems. There have been few other artists who have been able to make 11-minute songs the status quo with no wink of irony. His last album, Hang Cool Teddy Bear, was as fun a rock record as you could find in 2010 and his best album since the 80s. His latest work, Hell in a Handbasket, however, takes the success of Teddy Bear and pushes it a few awful steps backward.

The biggest problem with Handbasket is the songwriting. Meat Loaf has been blessed with solid teams of songwriters pumping out mini-rock operas that play to his theatrical and vocal strengths. Jim Steinman made him famous on the first two Bat Out of Hell records (the first being the fifth best-selling album of all time), as well as 1981’s Dead Ringer. Teddy Bear saw him working with Jon Bon Jovi, Justin Hawkins of The Darkness, Eric Sean Nally of Foxy Shazam, and songwriting legend Desmond Child. Handbasket has a few from the Teddy Bear team, but either not the right ones or not enough of them. There is little to no focus to tie the songs together. It seems to be a collection of songs that are sort of angry at something, but only in the broadest sense.

Meat Loaf’s success comes from albums that have a core concept and story. Handbasket is all over the place. He’s perturbed about greed and exploitation on “The Giving Tree”. Singing how he was “temporarily blinded by the neon dollar sign,” which caused him to sign a deal for “one pound of gold for 10 pounds of flesh.” He fights against fair-weather fans on “Party of One”, where he drops both the phrase “talk to the hand” and the cringe-worthy line “I live alone but at least my roommate knows me.”

Then there is the charity single/hell-storm that is “Stand in the Storm”, which features his Celebrity Apprentice cohorts Lil Jon, John Rich (of Big & Rich), and Mark McGrath. The song was recorded and released during the show’s run and turns out to be just as bad an idea as the bill would suggest. Each member’s verse signals a change in music and mood. To be fair, Lil Jon’s verses on the song would be the low point on the record if it weren’t for Chuck D’s appearance on the obnoxiously titled “Blue Sky/Mad Mad World/The Good God Is a Woman and She Don’t Like Ugly.” Both rappers come out of nowhere in the songs, and knock you off balance in the worst way.

Also, there aren’t words enough to describe the horror of the cover of “California Dreamin” by The Mamas and the Papas. Meat Loaf duets with longtime touring vocalist Patti Russo on this slow, overblown take of an otherwise beautiful song. Whoever had the idea for this must have just assumed that since Chris Farley did an impression of both Meat Loaf and Mama Cass, it would work.

Vocally and interpretively, Meat Loaf is still on top of his game. You really can’t find another performer who is as natural a talent and puts as much emotion into his performance as him. Even at age 64, he can hit some notes that boys half his age can’t dream of getting out with as much power. Unfortunately, it’s nearly all for not on this album. It seems like he, or his team, wanted to get something out quickly to try and capitalize on his Apprentice appearance, causing everything to feel forced. Had he given himself and his team enough time to sit with the songs, he could have focused the album a little more. As it stands, the album is an imprecise outline of what a great Meat Loaf album can be. As he sings in “The Giving Tree”: “You gotta sell this old soul for whatever you can get.” Celebrity Apprentice sold him out to a new generation, and Hell in a Handbasket was whatever he could get.

Essential Tracks: “All of Me”, “Another Day”