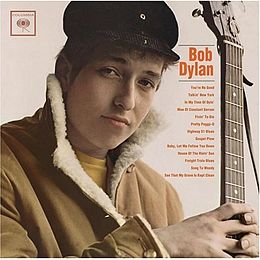 “An artist has got to be careful never really to arrive at a place where he thinks he’s at somewhere. You always have to realize that you’re constantly in a state of becoming. As long as you can stay in that realm, you’ll sort of be alright.”
– Bob Dylan

After dropping out of the University of Minnesota during his freshman year, Bob Dylan moved from Minneapolis’ Dinkytown to Greenwich Village, New York, a residential plot on the west side of Lower Manhattan, in the beginning of 1961. The littlest information of Dylan’s early ‘60s might explain why: The pull of the Village’s brimming music scene was simply too much for the 19-year-old to ignore, as he had been exploring its folk records, not to mention the Beat literature emerging from the area’s sometime denizens Jack Kerouac and Allen Ginsberg, since high school.

Dylan played his first gig in the Big Apple the day he arrived, at esteemed coffeehouse Café Wha? It’s doubtful any significant documentation from the gig exists, and it’s even hard to guess what songs Dylan might have played that day (although it’s likely one or more of them was by Woody Guthrie, ever-obviously his idol at the time). But no matter, interest would flock to Dylan soon, as he was regularly performing covers at New York clubs within a few weeks and would be signed to Columbia Records, despite its reluctance to record folk singers, during the fall. Then, on two late-November days, Dylan’s self-titled debut LP, an album built mostly from time-honored folk songs, was recorded.

For a few reasons, Dylan now recollects the album, produced by John Hammond and released 50 years ago this week, with an air of regret. “I thought I’d recorded the wrong songs,“ he said in No Direction Home, Martin Scorsese’s 2005 documentary about Dylan prior to his summer 1966 motorcycle accident. “When I got the disk, I played it and I was highly disturbed. I just wanted to cross this record out and make another record immediately… I was way past that record.”

At least from a sheer musical standpoint, Dylan* really isn’t all that exciting. It’s one of only four Dylan studio LPs (The Times They Are a-Changin’, Good as I Been to You, and World Gone Wrong being the other three) whose only instrumental accompaniment comes from acoustic guitar and harmonica. And even with that, all the guitar playing here is generously basic; on most songs, Dylan strums major- and minor-key chords in their most basic shapes, with occasional instances of single-string articulation, under his singing. 50 years on, it’s safe to say that he’s never been flashy, but the sonic palette here is so basic, so lacking of flash, that it’s hard to not focus on the words.

The first track on the album, “You’re No Good” was written by Georgia native Jesse Fuller, whose work would eventually be covered by the Grateful Dead, Paul McCartney, and Eric Clapton, among others. It lasts exactly 100 seconds, too short to have a whole lot of lasting value, but its tempo reaches over 150 beats per minute and Dylan rushes through the thing with a contagious energy. “You got the ways of a devil sleeping in a lion’s den/I came home last night and you wouldn’t even let me in,” he sings, abbreviating the lines with a husky chuckle, one of the nuances of the song indicating how well he could interpret a song that wasn’t his, even back then.

The brisk pace of the opener extends into second track “Talkin’ New York”, wherein Dylan does little more than account his first few days in the Village: “I swung onto my old guitar/Grabbed hold of a subway car/And after a rocking, reeling, rolling ride/I landed up on the downtown side/Greenwich Village.” Yet apart from the autobiographical information, there’s really not a whole lot to the song; there’s no discernible melody, and Dylan’s singing is really him talking with lilts thrown in here and there. It just kind of floats by, and even after a few listens, it’s hard to recall, at least melodically speaking.

Then something changes: The next song, “In My Time of Dyin’”, a traditional gospel number, thrusts the album into a world of self-seriousness. The track, later covered by the likes of Led Zeppelin and John Fahey, is based around Psalms 41:3 (“The Lord will strengthen him upon a bed of languishing, though will make all his bed in his sickness”), and Dylan’s version finds him straining his voice, in part because he likely wanted to underscore the song’s anguish and in part because, well, his voice had some virility to gain. Emotionally, it’s a far cry from the first two tracks, and it’s the album’s first instance of its fatalistic slant.

Following the lineage of “In My Time of Dyin’” and, to an extent, world-weary fourth track “Man of Constant Sorrow”, “Fixin’ to Die” is a song fixed on, well, death. Written by Memphis blues singer Bukka White, it was originally titled “Fixin’ to Die Blues”, and since Dylan’s version is much less slow and deliberate than White’s, it makes sense that he dropped the last word of the original title. Like several other songs here, Dylan’s playing of the song led to a small renaissance of the artist who wrote it, as Fahey and ED Denson would cover White songs in subsequent years.

Refreshingly if not thankfully, “Pretty Peggy-O” snaps Dylan out of the dismal streak of the previous three songs. A Scottish traditional song with a long, complicated history, it was originally titled “The Bonnie Lass o’ Fyvie”, and Dylan may have been the first American artist to record the song for a major label. Like “You’re No Good”, the version here sounds hurried, but because of its sort of giddiness, not superficiality.

Sometimes mistaken for a Dylan original, “Highway 51” may be the least notable song on the album. In essence, Dylan just cranks out hard strums, with an occasional deliberately struck bass note, for the duration of the song. Plus, since there’s much repetition in the lyrics, it all comes together like it maybe should have been an outtake of the album. (And no, it’s bears no real connection to Highway 61 Revisited nor its title track.) By and large, that’s all true for “Gospel Plow” and “Freight Train Blues”, appearing later on the album, too.

Dylan didn’t sell well immediately upon release, moving only 5,000 copies in its first year, but that was mostly due to how Dylan played the songs, not necessarily the songs themselves. A case in point is “House of the Risin’ Sun”, a song he heard from Dave Van Ronk regularly in New York, which would become a bona fide hit for the Animals in the summer of 1964. The reason for Dylan‘s non-success is simple: Detailing what seems to be a New Orleans brothel, his version, stark and arresting, can be truly haunting, unlike the pop-centric renditions of the Animals and most who subsequently covered the song (notably, Dolly Parton in 1981 and Sinéad O’Connor in 1994).

Arguably the lone song here that truly provides a glimpse of Dylan’s worldview at the time, “Song to Woody” was his first original lament of repute and purportedly written in five minutes. Though invariably, and rightly, considered an homage to Guthrie, it also allowed Dylan to step inside the mind of his hero  - and, perhaps, imagine himself as a hero in his own right. “Hey, hey, Woody Guthrie, I wrote you a song/About a funny old world that’s a-comin’ along/Seems sick and it’s hungry, it’s tired and it’s torn/It looks like it’s a-dyin’ and it’s hardly been born.” Those are very possibly the first lines that Dylan wrote, and then sang on a recording, that overtly accounted for something outside of himself, that generalized a feeling into something visceral and grabbing. In this way, “Woody” is a monument of Dylan’s recorded career and subtly flashes a scintilla of forthcoming genius.

The album’s grace note is another number about death, “See That My Grave Is Kept Clean”. Written by Texas native Blind Lemon Jefferson and notably adopted by Son House, it might be the most famous song here that never became a hit for anyone. There’s nothing really wrong with the song, but it can leave a listener cold because of how seemingly abruptly it ends. (Fortunately, Dylan would record a more satisfying version with the Band, released among The Genuine Basement Tapes).

In fact, that the album transitions, rapidly and seemingly randomly, from exuberantly playful to downright chilling becomes one of the things that makes this a curious record. It’s a good album, sure, but it’s never been likely to change anyone’s life; Rolling Stone’s 2011 list of the 70 greatest Dylan songs doesn’t feature a single number from it, nor does Amnesty International’s recent Chimes of Freedom 75-song tribute. And somewhat rightly so, because, apart from “Song to Woody” and maybe “House of the Risin’ Sun”, there’s almost nothing here to really get into, at least relative to some of the career-defining songs Dylan would record within three or four years (“Blowin’ in the Wind”, “A Hard Rain’s a-Gonna Fall”, “The Times They Are a-Changin‘”, “Mr. Tambourine Man”, and “Like a Rolling Stone“ chief among them).

So, aside from it being an absolute icon’s first coherent artistic statement, what makes Dylan so notable? The main reason: It might be the only album in which Dylan sounds a touch confined, like he was trying to fit in with whatever it was he perceived to be going on in the Village at the time. Talking and thinking at length about Dylan tends to yield a few observations, one of them being that, throughout most of his career, anyway, he did whatever he wanted, regardless of what critics, fans, and friends might have preferred to hear from him (overt examples include his Christian period and his going electric at the 1965 Newport Folk Festival). Dylan, when listened to closely, is an exception.

It’s all a little ironic, because while Dylan joined the Village movement in part to avoid, as he would put it in his 2004 memoir, Chronicles: Volume One, the “empty pleasantries” of pop radio, he ended up making a record that, intentionally or otherwise, lumped him in with any number of other Village performers. That’s not to say the record sounds conformist, but there’s no question that Dylan still had a lot to figure out, to invent, both in his songwriting and in his delivery. It wouldn’t be until the following year that the freewheeling Bob Dylan would truly emerge, ready to change and challenge popular music forever.