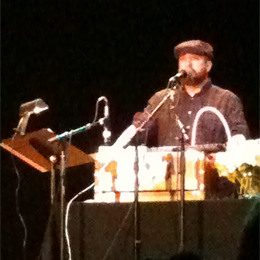 I love everything about Stephin Merritt. His bottomless baritone and deadpan delivery are unforgettable, and he penned some of the best pop songs of the last few decades as the front man of The Magnetic Fields. The band’s brilliant, three-disc, epic 69 Love Songs taught me everything I needed to know about the wonderful, horrible, and the hilarious possible outcomes of love when I was in high school. His quirks are adorable; I admire that he makes a concerted effort to wear all brown and that he experiences real-deal disappointment when he can’t enjoy cappuccino cupcakes at silent film screenings. (It’s true. He was my most polite customer when I managed a cinematheque a few years back.) But most of all, I love his deep understanding of the interplay of comedy and tragedy in the pursuit of love. And that’s why seeing Merritt and his Magnetic Fields live is such a treat; watching Merritt transform from a cranky curmudgeon into a sympathetic romantic, as he spins enchanting tales of hilarious and painful love affairs, always feels like witnessing something magical.

Last night’s show at the historic Orpheum Theatre opened with a charming performance from New Zealand-born singer/composer Bachelorette. With twin laptops and microphones, a guitar and a Monome controller, she looped and sampled her own vocals and handclaps to re-create her bedroom pop songs for a live audience. Her folk-influenced electronica is lush and gorgeous, though at times felt a bit distant and cold. Towards the end of her set, her technology started to fail her, but she managed to work through the problem and recover from the slight stutter.

With over two decades’ worth of material to draw from, The Magnetic Fields’ 27-song set included selections from early Merge LPs Distant Plastic Trees and The Charm of the Highway Strip, colossal masterpiece 69 Love Songs, Nonesuch no-synth trilogy of i, Distortion, and Realism, their latest, Love at the Bottom of the Sea—a return to both Merge and synthesizers—and even some Obscurities, all arranged for the band’s five-piece acoustic touring lineup, which featured Claudia Gonson (piano/vocals), Shirley Simm (ukulele/vocals), Sam Davol (cello), and John Woo (guitar).

As usual, Merritt refused to lead the band, opting to camp out on the far side of the stage and hide behind his harmonium. He often looked like he loathed—or at least was incredibly bored by—performing his own songs in front of an audience, but he soldiered on out of responsibility to his fans, like he’s done for the last 20 years, with the help of Gonson, who shared lead vocal responsibilities and joked with the audience throughout the night. It’s Merritt’s willingness to give up the spotlight that makes him such a talented band leader; he’s well aware of the individual talents of his players and deploys them expertly. Gonson and Simms’ vocals added depth and texture to Merritt’s songs, while Davol and Woo made the compositions come alive.

Because the band was touring in support of Love at the Bottom of the Sea, they played a fair amount of their new material (“Andrew in Drag”, “I’ve Run Away to Join the Fairies”, “My Husband’s Pied-Ã -Terre”, and “Quick!”) but were careful not to disappoint longtime fans who wanted to hear the songs that launched the band into indie pop stardom in the 90s. Predictably, the biggest audience response was to songs pulled from 69 Love Songs; I don’t think anyone expected to hear “Busby Berkeley Dreams” last night, but everyone was absolutely thrilled when Merritt began to sing, “I should have forgotten you long ago/But you’re in every single song I know.”

Merritt and Gonson’s fantastic sense of humor was on display with their introduction to “Book of Love”. The pair recounted the sad story of how Matthew Broderick fudged his lines in The Producers after hundreds of solid performances—“He must have been phoning it in the first 500 times and then suddenly woke up onstage that night,” Gonson reasoned—all to demonstrate how, after years of performing the song live, Merritt had suddenly forgotten the lyrics to his own song. But he wasn’t going to let that prevent the band from playing the song. “Good thing I have these lyric sheets here,” Merritt said. He wasn’t laughing, or even smiling, but he was clearly amused that he could suddenly relate to Broderick’s misfortunes.

The show ended with an all-too-short, two-song encore of “Tar-Heeled Boy” and “Forever and a Day”, despite several pleas from the audience to play “I Don’t Want to Get Over You”. It’s well-documented that Merritt doesn’t take too kindly to interruptions, especially when they are painfully loud; you should know better, you self-proclaimed Merritt obsessives. “We haven’t done requests in over a decade,” he said with a sigh. A fitting finale: As usual, Merritt does what he wants, and we love him for it.

Setlist:
I Die
Chicken With Its Head Cut Off
Your Girlfriend’s Face
Reno, Dakota
Come Back From San Francisco
No One Will Ever Love You
I’ve Run Away to Join the Fairies
Plant White Roses
Drive on Driver
My Husband’s Pied-Ã -Terre
Time Enough for Rocking When We’re Old
The Horrible Party
Smoke and Mirrors
Going Back to the Country
Andrew in Drag
Quick!
Busby Berkeley Dreams
Boa Constrictor
Book of Love
Fear of Trains
You Must Be Out of Your Mind
Grand Canyon
Swinging London
It’s Only Time
Smile! No One Cares How You Feel
Encore:
Tar-Heel Boy
Forever and a Day