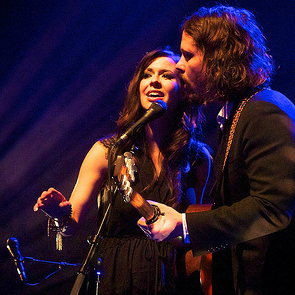 With most of their 10-date UK tour sold out, The Civil Wars could have expected a full house at Londons O2 Shepherds Bush Empire but the love shown towards the American duo clearly took them aback. Err.. why are you all here? enquired a bemused Joy Williams bringing a similarly puzzled response from her stage partner, John Paul White. It might have made no sense to him either but the audience were in no doubt about this bands stellar credentials. That expectation was met by a consummate live performance as White and Williams showcased their imperious song craft delivered, save for the odd bit of piano, with the simplicity of a single guitar and two hugely complementary voices.

Opening with the gently flirtatious Tip Of My Tongue, the vocalists meshed with uncanny precision and added some startling harmonies. The relatively straight country lick of From This Valley was peppered with vocal acrobatics while the plaintive guitar refrain of 20 Years was echoed with dream-tender harmonies. So caught up in such moments, it was four songs into the set before the pair could relax and start some banter with the crowd. Heres the closest thing to a dance song, White teased as he introduced Ive Got This Friend.

Looking marginally less like a piratical Johnny Depp than usual, John Paul White was more Southern gentleman than lounge lizard in his tight-fitting tux, while Joy Williams in a chic black cocktail dress and heels played the perfect hostess joyful in her mum-to-be status. The unusually quiet, ultra attentive audience hung on every note and word, just now and again unleashing cat-calls of warm appreciation. The duo seemed genuinely humbled by this response and endeared itself by declaring any achievements in a self-effacing manner. Examples included their recent Grammy awards, chart success and plaudits from the likes of Adele.

Outwardly The Civil Wars appear like a happily married couple, which of course they are, though not to each other. Their on-stage chemistry is such that the songs are almost acted out, particularly by Williams who engages with her partner at every opportunity, shooting him almost lustful glances and physically showering affection. This added a unique dimension to what was a stripped bare stage set and worked in total sync with the music which blends country, folk, and Americana into a distinct and heady brew.

With just one EP and album to draw on, the duo do not shy from putting their personal spin on selective covers. A sublime version of Portisheads Sour Times was served up with fresh dressing; the pair trading verses and coming together with hair-curling harmonies. The Jackson 5s I Want You Back is reworked as a tender love song. For the encores Billie Jean became a soulful, slow shuffle and while Leonards Cohens Dance Me to The End Of Love seemed a low key choice to end on, it was enlivened by a loud stirring conclusion accompanied by handclaps.

Such was the depth of the songs on offer, it was hard to single out standouts from their own repertoire though mention must be made of the exquisite Poison & Wine a hypnotic mantra of counter emotions that reaches its zenith in the delicious irony of I dont love you but I always will. The loud strum of Barton Hollow, counter pointed by hushed vocal sections, saw the duo in delta blues mode while To Whom It May Concern stood out as a great melody matched by a stunning vocal from Williams. The song ends with the lines Dear whoever you might be/Im still waiting patiently. Somehow I think the wait is over for The Civil Wars.

Setlist:
Tip Of My Tongue
Forget Me Not
From This Valley
20 Years
I’ve Got This Friend
Sour Times (Portishead Cover)
Barton Hollow
Falling
C’est La Mort
I Want You Back  (Jackson 5 Cover)
Birds Of A Feather
To Whom It May Concern
My Father’s Father
Poison & Wine
Encore:
Billie Jean  (Michael Jackson cover)
Dance Me To The End Of Love  (Leonard Cohen cover)