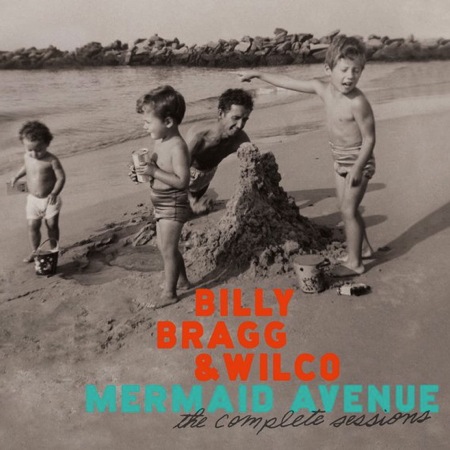 This year marks Woody Guthrie’s 100th birthday, and our modern musicians have not let any commemorations fall by the wayside. The anniversary brings tribute concerts spread throughout the year, as well as new recordings by Guthrie’s legion of fans. A recent example is this year’s New Multitudes, a collaboration between Jay Farrar, Will Johnson, Anders Parker, and Yim Yames, which gives listeners the chance to hear previously unused lyrics by Guthrie, sung atop new music. The quartet ran a game plan similar to the one used by a former bandmate of Farrar’s over a decade ago. And some Bloke from Essex.

Billy Bragg & Wilco’s Mermaid Avenue and Mermaid Avenue Vol. II are being re-issued, re-packaged, and ultimately melded together into a box set, with the added bonus of a documentary (Man in the Sand, highlighting the sessions) and the crÃ¨me de le crÃ¨me: Mermaid Avenue Vol. III, a 17-track album of its own featuring previously unreleased tracks. All these audio and visual discs combine to make Mermaid Avenue: The Complete Sessions, an experience embracing both old and new.

The first Mermaid volume sounds as gorgeous as it did upon its initial release in 1998. Bragg and Tweedy trade off powerful vocals, while the rest of Wilco’s musical input is just as important to the project’s outcome. The Wilco material translates as more summery and shimmering (this was the Summerteeth­-era) than Bragg’s folk-rock take on most of the material, but just about every interpretation of Guthrie’s lyrics reign supreme. “California Stars” has become a live staple at Wilco shows; its easy sing-along breathed to life courtesy of the steady beat held by ex-Wilcoer, Ken Coomer. Bragg leads the way on the politically/romantically charged “She Came Along to Me”, and plays plaintive guitar as Natalie Merchant takes the vocals to “Birds and Ships” (their duet, “Way Over Yonder in the Minor Key” is another album highlight). Bragg and Tweedy’s vocals don’t cross paths often, but when they converge on the down-tempo album closer, “The Unwelcome Guest”, the marriage is worth the wait.

Vol. II falls short of its predecessor, but is not without merit. With prose based around faith, love, and, yes, politics, Guthrie’s lyricism shines through any tension that may have been mounting between Bragg and the Wilco camp. It’s impossible to frown upon “Airline to Heaven”, which like “California Stars” gets massive replay at Wilco concerts. Wilco takes the Summerteeth approach with “Secret of the Sea”; throwing everything but the kitchen sink, musically, atop the words but somehow comes out completely clean. The late Jay Bennett’s fingerprints are blessedly all over the track, but leaves things be with the epic, acoustic-driven “Remember the Mountain Bed”. Bragg’s best contribution to this volume is the sing-along “My Flying Saucer” with its lightning-fast guitar strums. But the Englishman’s material pales in comparison to his stateside brothers this go ‘round, although his colaboration with Merchant for “I Was Born” is lovely.

Which brings us to Vol. III. Culled from the turn of the century sessions, a few tracks of the Bragg and Wilco tracks have production values that scream “demo”, and certain songs fade away rather than cut off, leaving one to gander a guess at how many of the songs are fully realized. Regardless, there are gems here, and the fact that someone else’s ghost looms large makes it a must-buy. I’m sure they’ll be some Wilco re-issues in a few years with unreleased material, but until that day exists we have some more contributions courtesy of Bennett. His piano and guitar play enhances the lilting “That Lonesome Wind That Blows”, and his organ lifts “When the Roses Bloom Again”.

As for Bragg, he provides much of the material here, with the haunting, banjo-infused “Man in the Sand” and picked-up finale “Out to Get” leading the way. His weary vocals highlight the stripped-down lament of “Jail Cell Blues”, and “Satisfied Blues” acts as a musical reinvention of his own “The Man in the Iron Mask”. Bragg’s new take of his old classic can be heard as an involuntary tribute: much of Guthrie is within him. With Mermaid Avenue: The Complete Sessions, he’s within us, too.

Essential Tracks: “She Came Along to Me”, “Remember the Mountain Bed”, and “Out to Get”