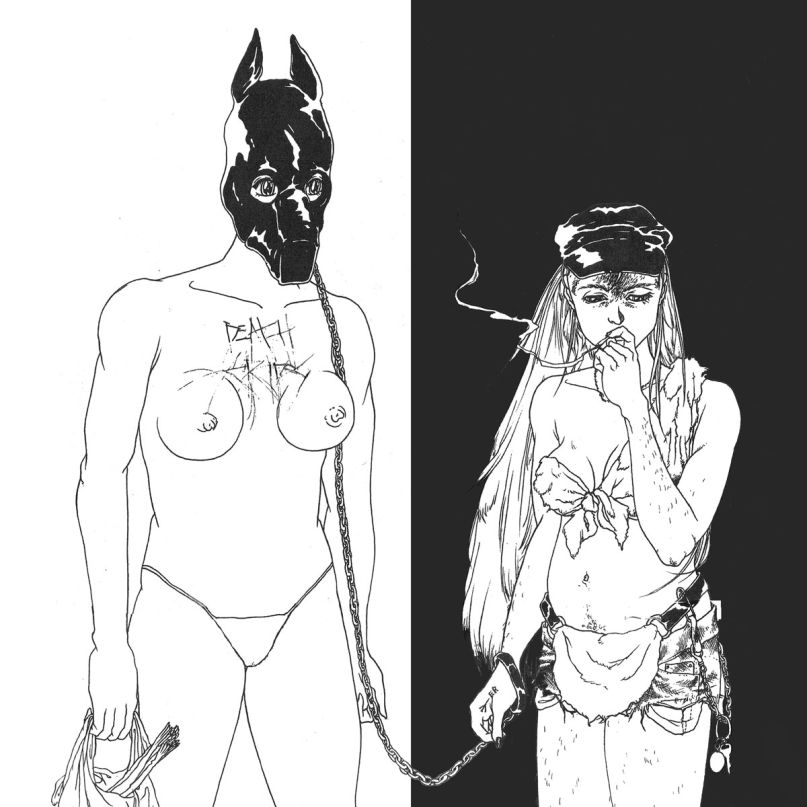 Following last year’s highly lauded Exmilitary mixtape, Death Grips – a Sacramento avant-rap outfit comprised of vocalist Stefan Burnett and the production duo Zach Hill and Andy Morin – released their major label debut, The Money Store, on industry stalwart Epic Records. The trio’s very existence depends on toeing a line between maintaining rap’s brooding thuggish-ness without overpowering it with their dubstep-inspired aesthetic. It’s a delicate balance that The Money Store maintains quite well, but when that balance crumbles, which it can with violent intensity, we get cuts like “Lost Boys” and “Hustle Bones”.

The former is indicative of one annoying tendency of the LP’s less favorable songs: a lackluster mix. Featuring a prototypical blend of woozy drums buzzing amid an unending wave of bass, it’s a beat that mutates back and forth, shaking up dance floors and jarring sensibilities. Add to that Burnett’s usual vocal offering, a sort of half-bark, half-drawl that’s simultaneously soulless and brimming with angsty potential, and you get something that should seemingly annihilate. But as is standard for the trio’s miscalculations, the elements are delivered rather blandly, snuffing out any bone-shattering influence they may have. It wouldn’t take much correcting–a few tinges here or a minor hook there–but failure for Death Grips is quick and all-consuming.

In a way, the latter track is not much different from its compatriot, save for a slightly bouncier energy and vocals that are exceedingly more vicious and unrestrained. What almost makes all the difference on “Hustle Bones”, though, is the ending refrain, where a super-sweet chunk of layered, mutilated female vocals is gingerly placed upon the previous formula. It’s a great counter to the testosterone-fueled mayhem and something that takes a rap staple (luscious female influence) and turns it on its head. Still, coming in at the end isn’t enough to help, and that too is indicative of another group shortcoming: a general sense of inexperience, with the Death Grips formula being continually analyzed and tweaked right before our ears. It’d be endearing if the growing pains weren’t quite as insufferable.

When the record’s achieved balance, there’s no denying the brutish appeal of “I’ve Seen Footage”, “Double Helix”, and “System Blower”. Each cut is so immensely impactful because, for the most part, they’re the record’s least experimental cuts, and thus they seem more normalized and, by extension, unique in the face of more abrasive numbers.

“I’ve Seen Footage” is the most clear-cut example of the rap-rock fusion, with the centerpiece being a grand, expressive guitar that chugs along at half-thrash pace while taking time out to bend and fold for gnarly results. Burnett’s performance is also decidedly straightforward, with the bark reduced to a sizable extent and the actual lyrics of the song brought up from the depths of effects hell (still, good luck deciphering anything beyond the catchy chorus call).

“Double Helix” builds the concept further, presenting a dominating and engaging vocal performance, with varied bits of subtextual emotion attached to the rapid-fire flow. The beat alone is worth repeat listens: Uber-woozy bass leads the way, with a veritable plethora of effects (hi-hats, erratic cymbals, a Weeknd-esque vocal sample) attempting to break through, the back-and-forth a beautiful mess of ear-killing ferociousness.

While not as fusion-heavy as the previous two, “System Blower” shines as the album’s most linear rap track. Here, the bass barrage is at its most essential and menacing, eschewing volume for emotional prowess and minor variations. Once more, the group proves an understanding of rap music 101, but adds their own embellishments for the sake of indulging their punk ethos. While it’s more “mainstream” musically, its subtlety will still melt faces.

With work on their approach to production, Death Grips will no doubt achieve a harmonious ratio to further dropkick all sorts of new ideas into the thick-headed boar that is the rap industry. Who knows, though, they may avoid “harmony” altogether, continuing to record unpredictable tracks that regularly bury or spotlight their truly redeeming qualities. Either way, they’ll only ever make music on their terms (which should always include doing it inches away from people’s faces). That chutzpah, beyond any musical decision, is what all genres need in spades nowadays.