Maps & Atlases – Beware and Be Grateful 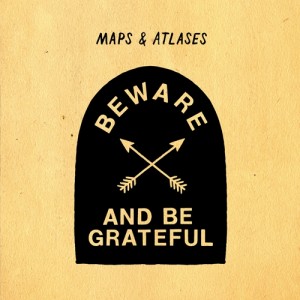 Beware and Be Grateful sounds nice, but is that enough? For Chicago’s Maps & Atlases, the answer is mostly no. Their second LP finds the four piece making a play for the big time. “The further from the edges the further from the trim/The fewer the coats the less you put in.” These opening lyrics on lead track “Old and Gray” encapsulate the album’s focus as sung by lead singer Dave Davison. Beware and Be Grateful takes away the edge of their debut, creating a tightly focused and traditional record full of hook-riddled pop nuggets that lands somewhere between John Mayer’s electric songs and a toned down TV on the Radio.

The production here is clean, and the vocals ring through with perfect clarity, as on the bouncy, African rhythm guitar heavy “Winter” that unfortunately never fully hits its stride. The acoustic driven “Remote and Dark Years”, a Peter Gabriel-influenced song, finds singer Davison symbolically using a beer can stuck in the gutter to rid himself of his gloomy past in the lyrics, “I pick them up and flatten them and push them through the grates.” The intentions are good, as is the sentiment, but it lacks that gut-punch impact it needs to be effective.

It’s not all bad, though; when Atlases turn up the amps, things get decidedly better. The toe-tapping of “Vampires” might be the most straight-forward track they’ve ever laid to wax. “Be Three Years Old” continues this brief momentum with its breezy melody and poolside prowess. It’s songs like these that should make Vampire Weekend take a hard look at this group to fill the opening slot on their next tour. Album closer “Important”, a Walkmen-esque dirge, rises above all else and is not surprisingly the one track that doesn’t fit the mold of Grateful. This is a shame, because as the album blueprint, it would’ve laid the groundwork for a much more hard-hitting record.

In the end, it is hard to hate such harmlessly light music. Beware and Be Grateful, as pleasant a listen as it may be, carries with it a feather’s weight, and that usually equates to an album with little staying power. But with laidback and carefree summer months rapidly approaching, this album might be just what you’re looking for.