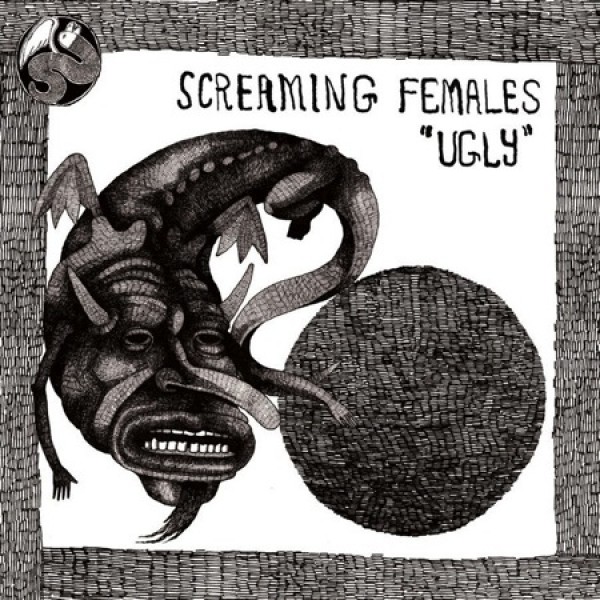 A unique voice can make a big difference on a rock album; esoteric, exciting vocals can make bad albums tolerable, or (as in the case of Screaming Females’ latest, Ugly) they can make a good album great. The New Brunswick, NJ trio’s blend of parading indie punk and fuzzy college rock is a heady mix, but Marissa Paternoster’s skyscraping, jet-fueled delivery pushes it over the top, reaching heights that exceed the sum of the parts.

An easy note of comparison for Paternoster’s delivery would be Sleater-Kinney’s Corrin Tucker, but to say that this is a direct copy would be a disservice. At best she’s a descendant, having found her singular delivery. It’s not all vibrato (though when she rips into it, her voice crackles), instead diving into twists of nasal dissonance or dipping low to growl out a few words for effect, all in a single line. In the chorus to “Rotten Apple”, Paternoster sounds like she’s having a solo call-and-response session, insisting “I’m a rotten apple” in a low grumble and then yelping the same line right back, the sneering punk taking turns with the bravado rock star.

Produced by Steve Albini, the instrumental portion of Screaming Females’ sound remains relatively similar to their past albums, swathes of Dinosaur Jr.-style guitar riffage blending with stitches of insistent punk rhythms. While the energy level is the lifeblood of the disc (and of the band’s live shows, as anyone who’s seen them can attest), there’s a strong amount of restraint in the production. On the insistent, snaking “High”, King Mike’s snap-crackle-and-pop bass and Paternoster’s absolutely shredded guitar solo steal the day, but the song builds to a climax on interlocking grooves and washed-out screams rather than a concussive break.

Album opener and lead single “It All Means Nothing” sets the stage for the shadowy tone of the lyrical content. Paternoster’s huge guitar hook kick-starts the track, followed by lines about striving to “Splinter your bones/Going for broke,” all leading to the nihilism of the song’s title. The desperation of the lyrics, though, doesn’t come through as directly in the music. Some songs come through that late ’80s college rock filter a little stronger than others, and this is definitely one of those, sunny washes of J. Mascis guitar thriving over shuddering drums. On the other hand, the talk of lost love on “Extinction” is equally matched by the vocal squeals and shadowy bass, the band loping into dark territory with some serious swagger.

Even in the darker corners, though, there lies an undeniable strength. Just before kicking into another slick guitar solo on “Rotten Apple”, a light, harmonized guitar and rim-clacking percussion bridge sets the tone for some of the darkest lines on the album: “Heaven forgive me, heaven forgot me/Hell is within me, hell’s all around me now,” Paternoster cracks. On that same track, though, she repeats that she’ll never let the object of her desire go.

The ska-like skipping of “Expire” and the headbanging psyche-rock of “Doom 84” sound almost nothing alike, but Paternoster’s roar and the tight punk sensibilities of Mike and drummer Jarrett Dougherty keep the album together, delivering a unified voice through a diverse set of sounds. Uncertainty, lost love, and loss in general are all important themes of the album, but Paternoster’s voice is so assertive, so emotionally evocative that it’s not about wallowing in the darkness. Indie rock albums with this uniquely developed a voice don’t come around often, especially not when it’s this much fun.