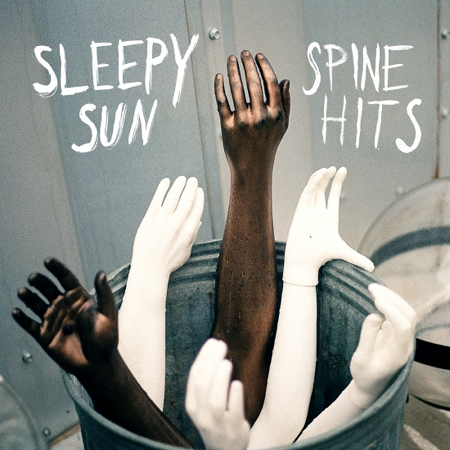 The first time I saw West Coast rockers Sleepy Sun live, they had a costumed wizard onstage, possessing the presence of a traveling caravan of desert minstrels, as Bret Constantino and Rachel Fannan exchanged sun-tinged vocals like flying doves. On tour this spring to promote their third LP, the group’s leaner line-up echoes the new, straightforward sound they favor on Spine Hits, the change being both a welcome release of weight and an unfortunate loss.

Now, blues-rock opulence is swapped for brevity, as Spine Hits features shorter and consequently more songs than its two predecessors. Gone are the acid-drenched epics like “White Dove” and “Sandstorm Woman” that Sleepy Sun excelled at amongst their peers, and the longest track here, the fuzzy, upbeat “Martyr’s Mantra”, is more akin to the steady, guitar-filled dance-rock than the multi-movement, dynamic constructions on Fever and Embrace. Several songs toward the beginning, such as “She Rex”, feature steady rhythm from Brian Tice and Jack Allen and spicy chords and riffs from Evan Reiss and Matt Holliman, but they fly by quicker than before. There are plenty of gems to be found in Sleepy Sun’s new groove, though. Wistful, laid-back twangs are found in “Boat Trip” similarly to “Golden Artifact”, but the band depends less on lengthy Spaghetti Western motifs of old and more on folksy progressions and quaint cadences.

Without one of the band’s founding members, you get the sense that Constantino’s singular vision for Sleepy Sun is still finding its way. His solid lyrics dealing the elusiveness of romance and reality command the same attention they always have, but now Constantino’s role of lone singer brings his voice to the forefront, sounding less effected and less distant. Spine Hits works best when Sleepy Sun takes familiar essentials and rock out in slimmed-down fashion, as faint, high-range backing voices and changing tempos are found on the concise, stinging tracks “Creature” and lead single “V.O.G.”. The lack of guitar solos and harmonica wails, however, is noticeable.

Perhaps it’s a stepping-stone to a bolder sound, but Spine Hits is still a great collection of rock songs, and while there’s a grain or two of filler, itdelivers in immediacy and replay value. It comes down to whether you were wishing they’d get to the point during their previous spacey, psychedelic passages, or whether you’ll give a band looking to trim down a chance.