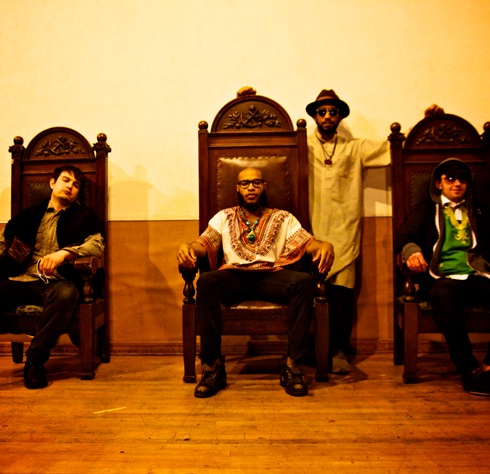 “When the rainbow collapsed and the 4th dimension became overpopulated, the Siddhartha came glaring with love, and diamonds in the place of sinew and nails.” So begins the “myth“ of San Francisco psych-rockers Siddhartha (no stated relation to the ’70s prog/art band), whose swirling guitars have coined a new genre, Dashiki Shoegaze. After forming the band in 2009, singer/songwriter Marlon Hauser recorded their debut EP, If It Die, while either homeless or living in a windowless apartment.

According to Hauser, the resulting combination of claustrophobia and spaciousness made him ”a bit strange.” He adds, “It’s a good thing, I think. I’m able to escape the sound and interference of the outside world.” Fortunately for the listener, Hauser’s inner sound and fury come to a head in the dense arrangements on the first cut off the album, “Diamond Dust”. Bookended by eerie harmonies, the track suddenly erupts into crashing hi-hats and Hauser’s indecipherable echo shrouded in distortion. Check it out below.
Siddhartha – “Diamond Dust”

If It Die arrives May 1st via Neurotic Yell Records.