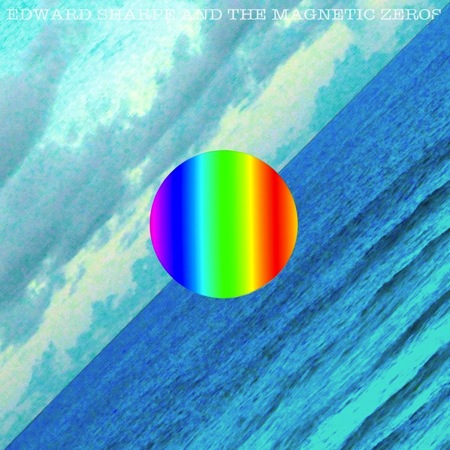 Edward Sharpe and the Magnetic Zeros look like an escaped band of art students, and their sound does nothing to dissuade that perception. Hippie-folk-rock is their forte, executed to delicious heights on their debut, 2009’s Up From Below, and smeared all over the country on their ensuing tours. While their playfulness is initially charming, those who spun that debut a few too many times may have found that quirk can become a little grating. Even the adorableness of the dialogue on “Home” has long since faded on repeat listens.

It’s a relief, then, that the band’s second release, Here, focuses more on the music. It’s still quirky folk-rock to be sure, but there’s less adorable dialogue and more tasty harmonies (although female vocalist Jade Castrinos takes more of a backing role here instead of splitting the singing duties as before). Opener “Man on Fire” leads with soothing guitars and vocalist Alex Ebert singing peaceably: “I want the whole damn world to come dance with me.”

Despite this wish, the album is more of a chill out than a dance record. “Mayla”, “Child”, and closer “All Wash Out” continue the meditative tone, with simple rhythms and arrangements that evoke a sense of calm. The focus on Ebert’s vocals perpetuates the languorous, connected feeling between tracks. This would be an excellent record for both dreaming and napping, although the pervasive calm does sacrifice the addictive, ear-worm quality of the debut.

The Magnetic Zeros mix things up a bit with some stylistic variations, including a summery, Marley-influenced sound on the aptly named “One Love To Another”, and a ‘70s folk guitar a la Jim Croce on “Dear Believer” (complete with sassy lyrics like “Anger, anger/you’re finally my bitch”). We also get a taste of hippie-inflected gospel on “That’s What’s Up” and “I Don’t Wanna Pray”.

Tempo-wise, Here is paced extraordinarily well, a smooth ride through and through. As Ebert fades out, repeating “It’ll all wash out/in the rain,” you’ll want to hit repeat in order to extend the dreamy trip. If Up From Below was a crazy dance festival, Here is the smooth joint smoked in the shade afterwards.

Essential Tracks: “Man on Fire”, “All Wash Out”