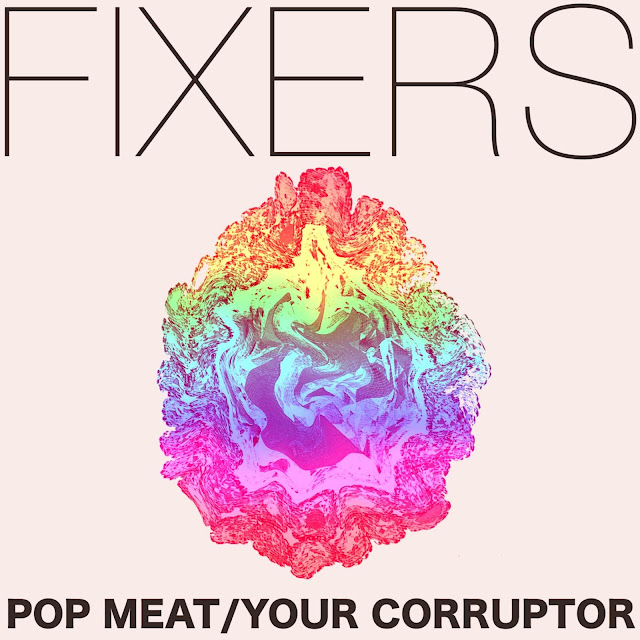 Crafting zany, heartfelt pop snippets but assuring us they can rock out in the silliest of ways, Fixers set out determined to crack a smile on the most sullen face with their extended play Pop Meat/Your Corruptor (an American re-release of Here Comes 2001 So Let’s All Head for the Sun). The name change may simply not matter for fans in the States, but whatever this EP is called, it has the flair and pluck to hint at the capabilities of this Oxford quintet..

Fixers embrace the strange, colorful sound between Los Campesinos! and fun., but they’re altogether less bombastic than either. Lacking pretension and the unnecessary punctuation of those bands, they stream forward with a glaze of pureness and naiveté akin to groups like OK Go: The band’s tenacious positivity infects you with a bobbing head and a light heart.

The EP’s true gem, however, is “Passages/Love in Action/108”. An impressive three-movement medley, it invokes full-blown sun, moon, and ocean analogies, choir chants, broken piano riffs, and sound collages. Goldstein’s lyrics leave plenty to be desired, but here his reverb-heavy delivery gives way to a soda-pop rockabilly swing backed by a late-’90s dance beat, all before melding into a crash of keyboards, guitars, and cymbal smashes. It’s a tremendous joy to let unfold, even if not the best introduction to the band.

What does work as an excellent introduction for American audiences, though, is Pop Meat/Your Corruptor as a whole. As they look toward their first LP release later this year, Fixers map out their mission statement in five strategic songs here, with just the right nerve to create something extra special in the future.