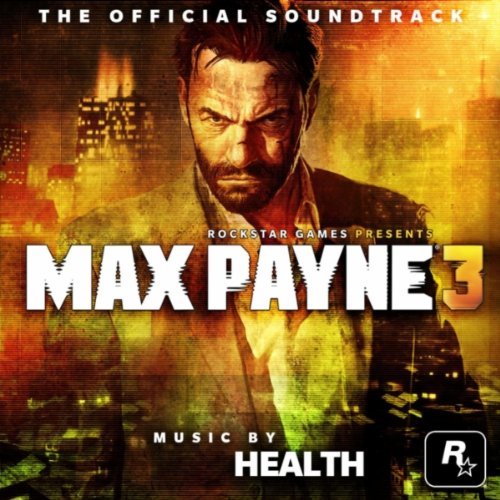 To hear HEALTH bassist John Famiglietti talk about it, the band received a call out of the blue, saying, “Rockstar Games wants to take you to dinner.” The LA noise rock fourpiece might have seemed like an odd choice at first to soundtrack Max Payne 3, but their first foray into scoring proves that they were more than up to the task. Though game soundtracks like this are always missing half of the experience, the evocative, tense, concussive compositions on the Max Payne 3 Official Soundtrack is an energizing experience on its own.

As a standalone, the centerpiece of the soundtrack is clearly “TEARS”, the only fully-formed song of the bunch. Whereas the other tracks may have power in this form, they’re clearly designed to coexist with a certain narrative. “TEARS”, on the other hand, could fit onto either of the group’s official LPs, or it could even be a preview from their upcoming third full-length. The incredibly heavy, mechanical synths stutter out, the drum sequences thud-clap away, and vocalist Jake Duzsik’s haunted falsetto lingers in their midst. Almost counter-intuitively (as is their fashion), the group manage to build a danceable groove out of a single metallic note hammering out over and over.

Other parts of the soundtrack sound so plainly different from what we’ve come to expect from HEALTH. “Torture” uses recognizable guitar trills (though swamped in a filter), while the eerie piano plinks and string-like synth lines on “90” are vaguely reminiscent of the Twin Peaks soundtrack (a reference that fits on a good portion of the disc). Elsewhere, the results are HEALTH tracks in an epic, instrumental bent. Drummer BJ Miller’s always impressive thundering tribal rhythms steal the show on “Max: Kill” and “Guns”, and their electronic wizardry shows on the shimmering angularity of “The Imperial Place” and the swarming “Dead”. While it’ll never match the group’s other LPs (and why should it?), it’s an impressive work to admire. The group’s blend of dance, noise, and punk has always been impressive, but this album proves how versatile and capable these four can be.