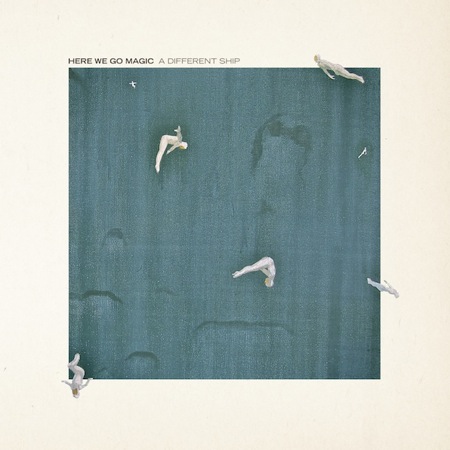 Much of the crowd was just awakening when Here We Go Magic took to the stage at Glastonbury in 2010, but it was their sighting of a famous pair (“that’s fucking Thom Yorke and Nigel Godrich“) amongst them that unknowingly set the trajectory for A Different Ship. Godrich later appeared at follow up gigs, and while Here We Go Magic had yet to talk of a new record, it was his offer to assist them that changed their minds. While the album was recorded in the wake of a can’t miss opportunity, it’s the band’s strongest release to date.

This is the third album to be recorded under the Here We Go Magic moniker, and only the second to include a full band. While Pigeons was a psych-rock experiment, as front man Luke Temple tried to grasp a certain sound, A Different Ship is a refined counterpart, capitalizing on the band’s ability to densely layer sound and create an album rich in trademarks of  Godrich’s production.

Pigeons-era material has the feel of an accidental jam session, cramming each spare second with sound, but this album utilizes much-needed moments of pause. “Alone But Moving” uses ripples of synths and vocal effects to shake up soft, gorgeous piano, while the tip-toeing of instruments and soaring vocals on the title track unravel into an ending of heavy Godrich-created experiments. The best of this spatial understanding is found in the serene “Over the Ocean”; the story of in-flight pondering uses dreary guitar and quivering keys to warm with Temple’s falsetto, and finishes in an ocean of intangible sound.

Even with the newfound production assistance, there’s still an updated version of their signature bustling psychedelia. “I Believe In Action” and “Make Up Your Mind” intermingle stout kickdrums with New Wave synths, and the infectious tale of reluctant love on “How Do I Know” builds a colorful collage of subtle instrumentation. Enhancing their previous sound, Godrich allows for an album that shows us the first realization of what Here We Go Magic can be. This isn’t a new band, just a well-honed new direction.

Essential Tracks: “Alone But Moving” , “Over the Ocean”, and “A Different Ship”