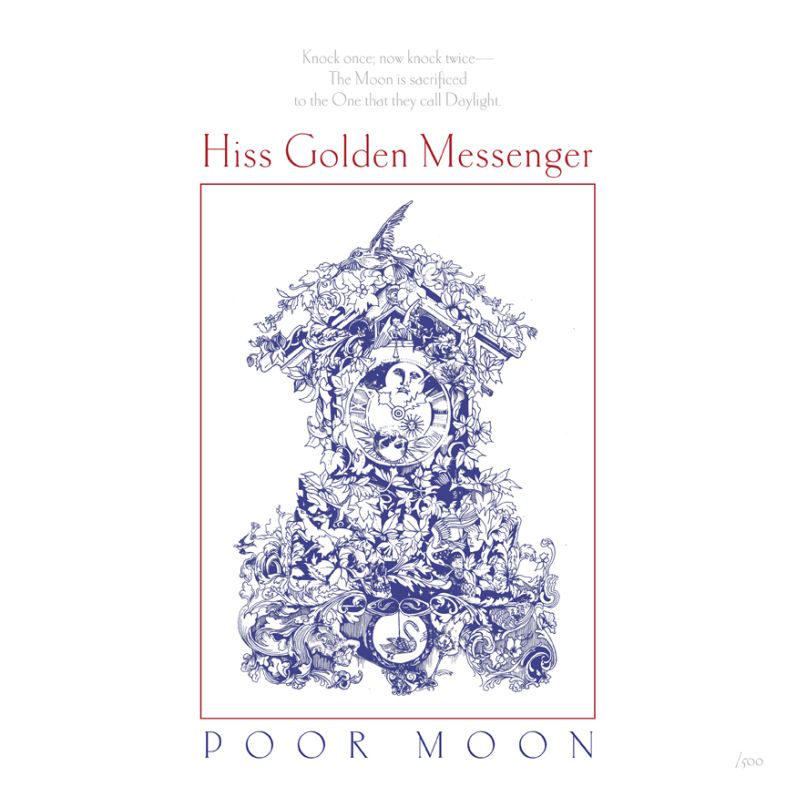 Hiss Golden Messenger is the new(ish) moniker adopted by North Carolina’s Michael Taylor, previously of San Francisco folk band the Cork & Spark. To put it bluntly, Taylor’s music sounds bad on paper, but good in headphones. I’ll describe this music and you will think it sucks, but it does not suck at all, so just wait. It’s seemingly easy soulful country-folk; with its Band-esque organ jaunts, classic rock noodle-ry, fluttery high-notes, and jaunty upstrokes, it’s ostensibly comparable to the smooth-folk dross of Ray LaMontagne and the like. Yet, this record has a spirit and intensity to it, despite elements that would usually be red flags, a la early Ryan Adams, an edgier Jason Isbell and the 400 unit, or the cleaner side of Will Oldham.

So why does it work? For one, the record’s darkly biblical wordplay rides along a precise, ominous twang. Some songs verge on the Christian-themed and many could be (and probably are) about Jesus. The record’s Biblical language brings a shadowy wrath to a record that sounds like what might happen if Jack Johnson or Ben Harper finally suffered– and learned how to express that suffering elegantly without boring us to death. Lyrics like, “I had a vision…. but I burned everyone with my vision,” seem to hint at Taylor’s gloomy obsession with a higher authority.

Though they’re firmly rooted in American twang, these songs never get as close to kitsch as they might without rougher edges. “Westering” is an epic guitar/piano romp with a sweeping country buildup. The instrumental “Pittsboro Farewell” is as backwoods as they come, with mandolin, banjo, and fiddle dancing around at a funeral. “Jesus Shot me in the Head” is probably one of the few murder ballads that’s about the son o’ God. Its Mickey Newbury-esque rain-sampled opening brings a sense of natural wonderment before the lyrics spitefully recount religion’s potential pitfalls with tongue nestled comfortably in cheek. “The time will come when the chosen one he calls on us in thanks/he loves us all but the ones who fall hold a chosen place in his ranks/least I hope this is how it goes/cause I’m just ’bout out of breath/So hey everyone did you hear the news?/Jesus shot me in the head.”

Now that might be too dense and figurative to really get to the bottom of, but if anything, by the end of this record you’ll at least have an idea of what being shot in the head by Jesus sounds like.