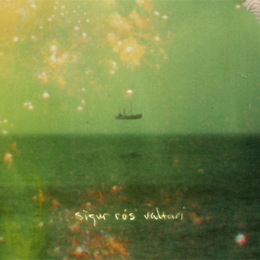 “Valtari” is the Icelandic word for “steamroller”. That’s an apt description for much of the music from Sigur Rós, exemplified by the epic “Untitled 8” (aka “PopplagiÃ°”) from 2001’s ( ). It’s a steamroller of sound, bowling you over with its emphatic build towards oblivion, exploding in a minor key catharsis.

But Valtari, Sigur Rós’ seventh studio album, is not that kind of steamroller.

Here’s a better metaphor: a large, clunking machine, moving incredibly slowly over pavement. The immense circular wheels spin with unbelievable sloth, but they spin nonetheless, rotating endlessly, repeating their circular motion, flattening all they touch. If you close your eyes for a second, you might not think anything has happened at all. As lead singer/guitarist Jónsi Birgisson put it in a Q Magazine interview, “the music kind of just rolls over you. In a good way.”

In a good way, indeed.

Valtari is universe music, the type of stuff to fill a cathedral, or maybe a valley. The first video for “Ekki MÃºkk” matches the fleeting, ephemeral quality of the music: A solitary ship sails across the screen, all sepia-toned and grainy, while a devastatingly slow, minimalist harmonic progression fills the vast spaces of the track. “Ã‰g Anda” opens the album with almost two minutes of wordless chanting, until the rattle of a guitar snaps us back to rock band reality, and Jónsi Birgisson’s falsetto voice enters like a warm glass of milk — comforting, home.

“In one word, it’s – beautiful,” commented bassist Georg Holm. The band’s website proudly flies another quote from Holm, claiming that “it’s the only Sigur Rós record I have listened to for pleasure in my own house,” which makes me wonder why ÃgÃ¦tis Byrjun gives him no pleasure. This is not Inni—a rock band playing loud, raw, drum-driven music. This is not the nearly-pop splendor of MeÃ° SuÃ° Ã Eyrum ViÃ° Spilum Endalaust. This is not the intense, driving builds of ( ) leading to ecstatic release.

This is ambience. This is minimalism. This occasionally feels like Morton Feldman’s music. These are meticulously calculated compositions, each weighty note serving its purpose in the grand arc of the album. This is beautiful.

Yet in its minimal elegance, Valtari lacks some of those qualities that have made Sigur Rós such an important band for so many people. For one thing, the album peaks too early: It happens during the third track, “VarÃºÃ°”. An old piano, or maybe a new piano made to sound old, offers chords behind droopy wisps of violin melody. Birgisson sings verses and a chorus, which seem almost out of place on this record. But what a chorus: Only three notes, a rising whole tone, a rising semitone. It’s simple, elegant, and hymn-like. Accompanying strings and a girls’ choir are almost a bit much, as if the music weren’t angelic enough on its own. A burgeoning drum pulse sneaks into the track, noise gradually emerges, and guitars deliver that apotheosis, a divine bliss, the “my God, it’s full of stars” moment of the album.

Aside from the quasi-religious chorus of “VarÃºÃ°”, Valtari is starved for melodies. There’s none of the indie-pop charm of “Gobbledigook”, the classicism of “Staralfur”, or the hushed intimacy of “Untitled 1”. Instead, shades of color supersede melodies and form, while circular harmonic progressions supplant goal-oriented ones.

Electronics permeate Valtari, and it’s difficult to tell what’s artificial and what’s organic, what’s electric and what’s acoustic. The album closes with four tracks tied together by the noise of crystalline violin harmonics, shimmering like shards of sound. “DauÃ°alogn” is the last song on the album with lyrics, but only the fifth track out of eight. Glacially moving chords, strings, and falsetto—if there’s a “classic” Sigur Rós sound, this is it. It’s a ballad on an album of slow, soft, delicate songs.

While the band has long dealt in expansive, repetitive, slowly changing music, the stasis in the final three songs will challenge even the most ardent fans. “VarÃ°eldur” is a soundscape of lethargic chord changes, where bass notes, glockenspiel, and wordless vocals gradually accumulate, then fade away until there’s nothing but piano and antique white noise. Only after a dozen listens did I realize it’s one of my favorite tracks on the album.

On Valtari, swirling electronics somehow sound warm, comforting, organic, alive – there’s none of the cold artificiality of much electronic music. The penultimate song, the instrumental title track, showcases all the synthesized splendor of the record, yet it’s a variation on a theme previously begun: More ambient sound, more slowly unfolding harmonies, all washed in endless reverb. The shimmering noise returns, like the sound of a sunspot seen through closed eyes. It’s anyone’s guess how these songs will come to life in concert. Like an impressionist painting, these tracks seem only there for a moment; open your eyes and they’re gone.

Valtari takes some time to get into; it doesn’t have the visceral immediacy of ÃgÃ¦tis Byrjun or ( ). Maybe that’s what Holm was hinting at: With a little age and a lot of patience, this record reveals its wondrousness.