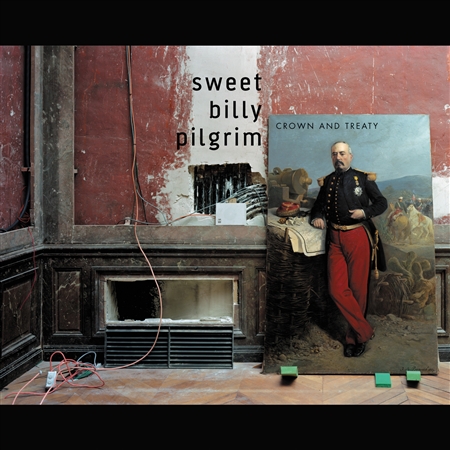 Crown And Treaty is the third album in a nine-year tenure from UK outfit Sweet Billy Pilgrim. The original trio of singer-guitarist-songwriter Tim Elsenburg, bassist Anthony Bishop, and drummer Alistair Hamer has been given an extra dimension with the addition of US-born guitarist and singer Jana Carpenter. The band tends to garner critical acclaim at will, trading in a curious yet convincing fusion of art-rock progressive bombast tempered with jazz time signatures and folk influences. Musically, Crown And Treaty represents a polished progression by the one-time Mercury Prize nominees, while lyrically it offers an intriguing take on the influence of past history on present day.

The band’s own musical influences cross decades so you can sense echoes of artists from Supertramp, 10cc, and Yes through to The Blue Nile, Radiohead, Elbow, and Fleet Foxes. The songs are intricately layered, with opener “Joyful Reunion” providing a fitting fanfare of punching horns, stabbing keys, and rumbling bass punctuated with sonar pulses over Elsenburg’s gently plaintive lead vocal. Jana Carpenter adds subtle harmonies here and there, blending with Elsenburg to best effect on the light and airy folk balladry of “Shadow Captain”. Each of the nine tracks offers something different to its fellows, from the precision progressions of “Archaeology” to the heartfelt, private questioning of “Brugada”, a song written in the wake of the untimely death of Elsenburg’s brother.

“Arrived At Upside Down”, with its playfully oblique musings – “Life is a place we arrive at upside down” – is a song that caresses rather than cajoles. Its pastoral evolution is nicely interrupted by a weird burst of Steve Howe-inspired guitar showered with odd orchestral embellishments. “Blue Sky Falls” offers a stately closer, moving from soft slow build to insistent refrain before dissolving into a short coda of notes delicately spinning into space. The record is littered with memorable hooks that lend immediate impact, yet like layers of an onion, it has an underlying richness of texture that makes you reach for more. It cleverly flits across genres so the band can sound like someone and also like no one. Such infidelity means the music is compelling and challenging from start to finish, a triumph of substance and style.

Essential Tracks: “Joyful Reunion”, “Arrived at Upside Down”, and “Brugada”