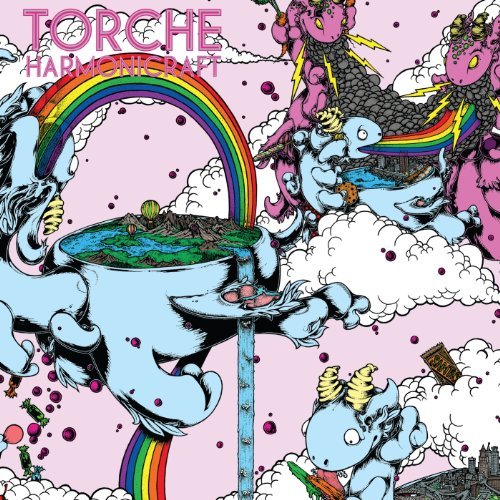 As a metal band, Torche exists paradoxically. The band puts rainbows on their album cover and sets their name in a pink typeface. Their music sounds happy instead of pissed. The band’s tattoo-less, ordinary-looking members aren’t interested in gory imagery (read: Slayer) or acting like mongoloid tough guys (read: Metallica); instead, Torche plays metal because playing metal is fun. Harmonicraft embodies that ethos.

Aligning guttural riffage with frontman Steve Brooks’ uplifting melodies, Torche’s “doom pop” is as cheerful as it is metallic. Harmonicraft sees the band sharpening its sludgy hooks and expanding upon the ultra-catchiness of 2010’s Songs for Singles EP. “Kicking” begins with an ear-snatching pick slide that melds into bouncy chords. “Lights on in the kingdom,” Brooks shouts with a Dave Grohl-ish delivery. Although his lyrics aren’t always discernible (or literally sensible), they’re sung with such triumph that it doesn’t matter. Brooks is most lyrically direct on “Kiss Me Dudely”, an apparent reference to his homosexuality (a subject broached more often by the metal community than by Brooks’ songs).

New guitarist Andrew Elstner sounds at home on Harmonicraft and replaces Juan Montoya, who left the group for personal reasons in 2008. Solos aren’t Torche’s bag, but Elstner takes advantage of the few he’s given, ripping through Jack White-inspired fretwork on “Off the Wall”. Elstner evokes Tony Iommi on “Looking On”, the album’s ominous closer, with a riff that’s one note away from being the diabolus in musica tritone (the notes of evil) used in “Black Sabbath”. Torche nails this gloomy change of pace while also realizing this isn’t how you end an otherwise upbeat album. After “Looking On” has seemingly faded out, Brooks returns, gleefully shouting, “Gonna leave you” over a pop-punk ditty.

Brimming with joyful bombast, Harmonicraft warrants re-listens. It’s the product of a band building upon past efforts rather than rehashing them. Never submitting to clichés or self-indulgence, Torche purveys something patently its own—an endangered virtue in a contemporary metal scene full of has-beens and revivalists.