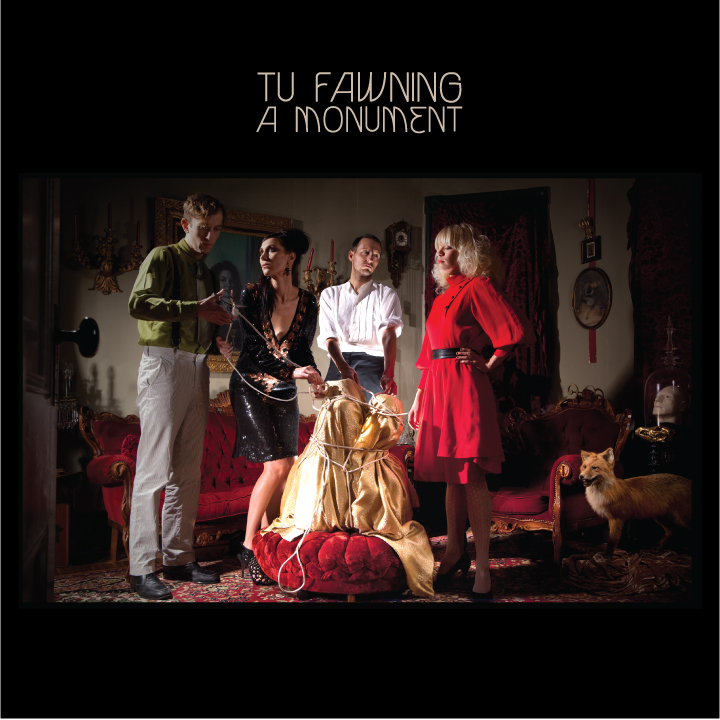 When Corrina Repp and Joe Haege formed Tu Fawning several years back, the outfit screamed “side project!” Repp had released three solo albums and had earned the reputation as one of Portland, OR’s better female vocalists, while Haege had his own career as the frontman of 31Knots. Even with 2008’s Secession EP and 2010’s Hearts on Hold LP (with Liza Rietz and Toussaint Perrault), Repp and Haege juggled other projects, Repp as a member of Viva Voce in 2009, and Haege as a touring member of Menomena.

The hyper-prolific Haege recorded a solo album, acted in a movie, and 31Knots released their seventh record all in 2011, so it would have been easy to believe that this was just an experimental vehicle for its band members. But with the band’s new, sprawling, variety-show-of-an-album A Monument, it’s official: Tu Fawning is a legitimate band.

A Monument counters Hearts on Hold’s penchant for repetition right away with lead single “Anchor”. The song begins with a singular bass drum, before synthesizers sprout up in a dark-yet-playful melody. Repp’s voice rains down on the instruments to create an ethereal atmosphere that grows as other elements enter the song. “Blood Stains” continues the varied construction of the album by bringing in some R&B horns, spawning a slower, ominous answer to the Eurythmics’ “Would I Lie To You” and “Missionary Man”.

“Bones” starts off as a three-minute instrumental of tribal beats, piano, and both jazzy and crunchy guitar sounds before Repp’s voice floats in and sings over the beat only. The song builds up to a crescendo of controlled cacophony to create a seven-minute exclamation point to end the album.

While “Bones” is a fitting end, the last half of the album contains songs that move at the same heavy pace. Even when the tempo bogs down the album, though, they still excel at producing a layered sound that capitalizes on each band member’s intense musicality. Tu Fawning has evolved from the sound of attending a funeral on Hearts on Hold, to the sound of throwing a carnival in a funeral parlor on A Monument. There’s a lot of life here to be had, and it’ll only get better.