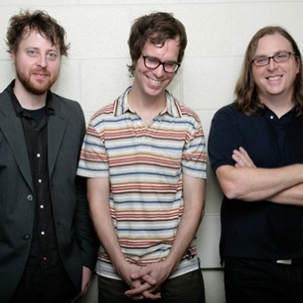 Ben Folds has had himself quite a prolific career. The world first became familiar with his quirky brand of alternative piano-rock through his band with Robert Sledge and Darren Jessee, Ben Folds Five. After their three albums and a rarities compilation, Folds went on to add three more LPs and and an equal number of EPs to his catalog under his own name. Tack on his numerous collaborations with the likes of William Shatner, Regina Spektor, author Nick Hornby, Amanda Palmer, and more, plus his work on films, and its clear Folds cup over flows with material.

Now, after more than a decade apart, Ben Folds Five have reunited. The band’s first onstage performance together since a one-off event in 2008 goes down this weekend at Mountain Jam, with more festivals and tour dates to follow. Whats perhaps most exciting for fans, however, is the promise of a new album from the trio due out this year. Three new tracks from the band appeared on Folds The Best Imitation of Myself: A Retrospective last year, but this currently untitled, crowdfunded record will be their first full one since 1999.

Whether by himself, with his friends, or with his newly reunited band, Folds repertoire keeps growing. Whatever the work, though, a hallmark of them all has been Folds lyrics. Witty, philosophical, melancholic, touching, or just straight oddball, Folds’ words have always made his songs instantly identifiable practically just by reading the lyrics sheet. But the real question is: Can you tell if its a Ben Folds Five song or Folds solo? Or was it a collaboration with some other artists? Weve created a little lyrical retrospective to test your knowledge. We tell you the lyric, you tell us if its BFF, Folds and his bffs, or Folds himself. Click on, brave listener, and find out if youre enough of a Folds fan:

Once you’ve tested yourself, click on to the next page for a full explanation of each question. Don’t go peeking, now, ya little cheater.