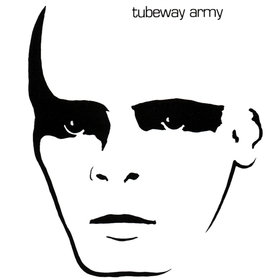 When you hear the name Gary Numan, if you’re like most people you will probably think of one thing– nay, one word – cars (and then you may start humming that infectious synth riff). The title of the 1979 single off his album The Pleasure Principle has forever linked the man with the New Wave idiom, and as an unfortunate side effect of never having another hit single in the US, he was also labeled a one-hit-wonder. Nothing is further from the truth, as The Pleasure Principle was Numan’s third release (though the first to be credited solely to him) and third consecutive number one in the UK. His first two albums came by way of his band, Tubeway Army.

In 1976, then Gary Webb met bassist Paul Gardiner in a short-lived punk band called the Lasers. Splitting a year later, the two along with drummer Bob Simmonds formed Tubeway Army with a goal to fuse the amateurishness of punk with a newfound interest in synthesizers. Replacing Simmonds with his uncle, Jess Lidyard, and changing his name from Webb to Numan, this lineup recorded two singles, “That’s Too Bad” and “Bombers” for Beggars Banquet in 1978. Think robotic power pop meets the likes of Kraftwerk in a mosh pit.

Certainly influenced by Kraftwerk, Tubeway Army also exhibited characteristics associated with glam rock’s experimental and electronic side seen in outfits like the John Foxx-led Ultravox and Roxy Music, and Bowie’s Berlin Trilogy, as well as Krautrock by way of Can and C(K)luster. Understanding that using synthesizers could help Tubeway Army break free of the clichés associated with punk, Numan began incorporating a mini-Moog synthesizer into the mix after finding one left behind in the studio. Free from punk’s limitations and avoiding any synth stigma via prog rock, Tubeway Army’s self-titled debut helped lay the foundation (along with bands like Suicide and Futurisk) of what became synth-punk.

Considered by many as a transitional album, bridging the punky nature of the band’s first two singles with the more familiar synth-driven material found on the band’s second (and final TA album) Replicas and Numan’s later solo credited material, Tubeway Army is at once hard-driving proto-electro clash and coldly calculated robotic synth pop, coupled with a science fiction dystopia a la Philip K. Dick (The first line of album opener “Listen to the Sirens” lifts directly from Dick’s novel Flow My Tears, The Policeman Said) and an oddly perverse perspective courtesy of William Burroughs’ seedy underworld.

The beginnings of Numan’s fascination with mystery, intrigue and espionage as seen in later songs like “I, Assassin” can be traced back to Tubeway Army’s “The Dream Police” and “Zero Bars (Mr. Smith)”. Other songs speak to male prostitution (“Friends”), teenage masturbation (the quirky and humorous “Everyday I Die”), and friendship with robots (“Steel and You”, complete with sci-fi effects leading into a blistering guitar riff). From singing about failed homosexual encounters on “Jo the Waiter” (one of the few acoustic numbers in Numan’s catalog) to living on life support (“The Life Machine”), there seem to be few topics that Numan is unwilling to tackle.

To speak well of Numan and Tubeway Army’s contribution to today’s musical landscape would be nothing less than understatement. With the electro-clash-punk-synth-pop-rock sounds of yesteryear returning via retro sounding outfits as well as newer artists evolving into fresher takes on the familiar, Numan’s influence is far greater than simply giving the world “Cars”. Listen to the guitar progression of “My Shadow In Vain”, which sounds like an early template for the Knack’s “My Sharona”, or the intro to “Friends”, which rivals that of any Foreigner or Foghat track of the day, and you’ll see his influence did not need to wait 30 years to be felt. Regardless of the time period, Gary Numan’s contributions to music, either solo or with Tubeway Army, in both the electronic and rock idioms are unmistakable, undeniable, and unrivaled.