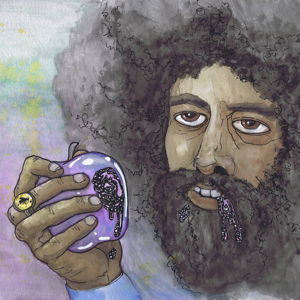 Who is Reggie Watts? If we can pin anything on him, its that he’s a 40-year-old man with massive hair. Deeper still: he’s close to 100 trillion cells organized biologically to form a human body. But having not met him in person to confirm this, let’s stick to what we know for sure: he’s a musician and he’s funny, but not a comedy musician. He doesn’t roll with “Weird Al” or Flight of the Conchords. As a solo performer, he noodles, loops, speaks, and sings in a stream-of-consciousness blur that’s just as hilarious as it is surreal. His performances and subsequent recordings consist of beat-boxed acid jazz about noble gasses… or fucking… or probably both. His comedy is a byproduct of introducing unlikely words and sounds to an audience. It’s about breaking your brain. Applying some fast and loose empirical evidence, let’s call him a performance artist.

This week, Watts’ released his third comedy-centric record, a CD/DVD called Reggie Watts: A Live At Central Park. Recorded on June 22, 2011, the set aired on Comedy Central this past week. His U.S. tour also started this week, with 16 dates announced so far. Then, next month, IFC will begin airing Comedy Bang! Bang!, a talk show which sees Watts play Paul Shaffer to Scott Aukerman’s off-beat Letterman. Last Friday, Consequence of Sound and Nerdy Show’s Cap Blackard dialed up Watts just before this explosion of new content and appearances to talk with him about the TV show, collaborations, freestyle, and mid-’80s fantasy films.

Most recently, you caught my attention with the news that you performed your own soundtrack to Ridley Scott’s Legend at SXSW. I’m a huge fan of Legend, so that was awesome for me. I was wondering how that project came about.

It was [originally] for San Francisco Sketchfest. They wanted to do this kind of residency thing that they called a Reggidency. One of the ideas was that they wanted me to score music to a silent film, and so I thought it would be funny to score music to a non-silent film. Certainly not a new idea by any means, but I thought Legend would be really fun, just because it’s so crazy, fantastic image-wise, and kind of nonsensically a good thing to go for. Plus, the soundtrack, at least the second soundtrack, by Tangerine Dream, was fantastic, and I loved it as a kid. So, I just wanted to do a take of it.

Is that why you chose the U.S. Theatrical cut over the extended Director’s Cut for the presentation?

Well, I think that’s just the movie they got. I didn’t really request the other one, but it was actually better, I think, because an audience’s patience with something like that… I wanted to make it as painless as possible.

I’m kicking myself for not being at South By this year, and this is one of many reasons. I was listening to the recording of the performance you put on your web site and you seem to have a really good memory for all the lines. In preparation for this, how many times did you watch the film?

I think I watched it recently, like within the last year. But as a kid, when that movie came out, I think I saw it like 13 times, so I have a lot of recollection.

You’re doing a show with IFC coming up called Comedy Bang! Bang!, and then there’s this sort of spin-off or sister show that’s goes along with it called Reggie Makes Music. I was wondering what you could tell me about your involvement with those projects.

Scott Aukerman has a show, called Comedy Bang! Bang!, which is a podcast. I did the theme song for it, and then on occasion he’d have me be on the show as a guest. When IFC approached them about making a TV show, they wanted me to be attached to it because of my musical involvement, and I’d be perfect for the musical dude. So that was the deal. It was pretty simple, just a visualized continuation of what we were doing. The Makes Music part was just kind of an addendum thing that we would add at the end of each filming day.