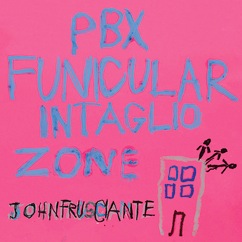 As previously reported, former Red Hot Chili Peppers guitarist John Frusciante will release a new solo EP, Letur-Lefr, in July. However, as it turns out, that’s just the first of two solo records planned for 2012. According to the musician’s website, the EP, out July 17th, will be followed by a LP entitled PBX Funicular Intaglio Zone on September 24th. He’ll also give away a new song called “Wall of Doors” in between the two releases.

Frusciante said in a statement, “I consider my music to be Progressive Synth Pop, which says nothing about what it sounds like, but does describe my basic approach. I combine aspects of many styles of music and create my own musical forms by way of electronic instruments.”

He explained, “The tracks on Letur-Lefr are from 2010 and PBX was made in 2011. Letur is a compilation, a selected portion of music I made that year while PBX was conceived as an album, the songs having been recorded in succession. The records are very different from each other, so prior to the release of the LP, I will make available a free download of a song called “Walls and Doors”. This song pointed the way towards PBX, but was recorded 7 months earlier. I always took it for granted that “Walls and Doors” would be part of the record, but as it turned out the record was better off without it.”

Frusciante sings, plays the instruments, and served as engineer on both the EP and the LP. In addition, “the EP features a few friends on vocals , mostly MCing (presumably The RZA and Truth Hurts’ Shari Watson).  The LP has one feature, the rest of the vocals being my own,” he said.

Pre-orders for Letur-Lefr are now ongoing at Frusciante’s website. Both records will be available on vinyl, CD, cassette and in 32 bit, FLAC and MP3 digital.

Thanks to Pablo for the heads up.