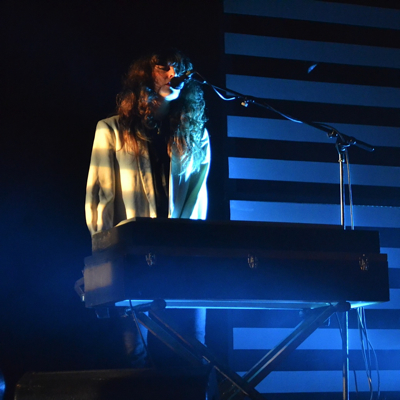 For the second time in over two years, Baltimore’s dream pop duo Beach House performed at The Fillmore in Miami Beach. The last time they visited South Florida, they were following in the footsteps of Vampire Weekend, which worked both for and against them – mostly because of the audience. While several fans showed up, ready to hear “Zebra” or “Saltwater”, all too many were amped to toss around to the radio and commercial-friendly vibes of “Holiday” or “A-Punk”. No doubt that tour helped push Beach House into many a household, but in the end, it made for an awkward scene. Now, with their long-awaited return, Victoria Legrand and Alex Scally are promoting their fourth studio LP, Bloom, and they’re at the top of the bill.

With weeks of surmounting hype – thanks to an exclusive Record Store Day 7″ of “Lazuli” and a recent stream of Bloom on NPR – the Miami crowd fell silent and bewildered as the dark and smokey silhouettes of Scally and Legrand came to fruition on-stage. The haunting organ of “Troublemaker” flooded the room, followed by Scally’s aquatic guitar lines, and once Legrand whispered, “Like a hand you reached out to me,” everyone held tight and drowned themselves in the murky pop.

It’s doubtful everyone has heard that NPR stream, and it’s even more doubtful they’ve committed the songs to memory. However, it was quite refreshing to see a solid body of fans, all transfixed to the newer stuff. Once the two dived straight into “Other People”, another new track, the crowd received it well – some danced, some swayed about, others even made out. Nobody reached for their phone – and if they did, it was to record it (naturally) – and hardly a soul stepped out for a beer or a bathroom break. Granted, they were two songs in, but it brought to mind something unique about today’s generation: The new material is the real ticket. The idea of a “release date” is almost obsolete at this point; in fact, it’s all relative when you get right down to it. Because of this ideology that once it’s out, it’s out, you have a generation that’s actively seeking new material and, what’s more, different ways to listen to it. Basically, it’s a generation of scavengers – and Beach House supplied nugget after nugget of aural gold. Prior to rolling out past single “Zebra”, Legrand observed this, noting, “A lot of the songs you’re hearing, you don’t know, because they’re new. Thank you for being patient.

In a recent press release, Sub Pop, the band’s label, noted that, “Bloom is meant to be experienced as an ALBUM. It offers a singular, unified vision of the world. Beach House took this statement to heart playing over 95% of Bloom for Miami. Now, admittedly, the Miami audience could only leave with heavy heads as the band ignored their 2006 self-titled album, but the night’s encore made up for that tenfold. The two broke into a medley that could be construed as a bold evolutionary scale for the band. They returned with Devotion‘s “Turtle Island”, continued into Teen Dream‘s “10 Mile Stereo”, and finished with what’s possibly the best track off of Bloom, “Irene”. This trilogy encapsulated the dense, enigmatic mystery this Baltimore outfit still possesses and evolves, even into its eighth year. If that’s not admirable, then this industry is in trouble.