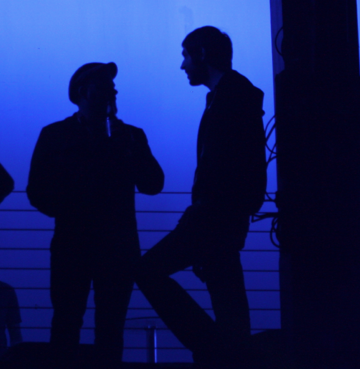 Last Friday night, San Francisco’s 1015 Folsom featured an electro-psych lineup of acts hailing from the Bay Area and beyond, with Oakland-based Lumerians opening for a rare live performance by Black Moth Super Rainbow.

Lumerians gave a performance that was surprisingly riveting and complex, sounding similar to psychedelic acts like The Doors and The Black Angels. They were an island of sound amongst fog, murkily hunched over guitars and keyboards as they launched into songs like “Burning Mirrors” and “Black Tusk” off their 2011 debut, Transmalinnia. Their rhythm and tone was befitting for 1015 Folsom’s gritty corridors, and was a perfect precursor to Black Moth Super Rainbow.

Originally from Pittsburgh, Black Moth Super Rainbow is a band whose name is only so appropriate – they are a bit fantastical, thoroughly intriguing, and beautiful to the eye. Tobacco (songwriter, vocoder), The Seven Fields of Aphelion (keyboard, monosynth), d.kyler (drums), and Ryan Graveface (bass, also the founder of Graveface Records) compose the artfully eccentric Black Moth gang, and given their pronounced alter egos, you’d expect a live performance as whimsical and wacky as Empire of the Sun. Yet, quite the contrary — the band members never said a word when they marched on stage, just dutifully played their set with a magnetism and fervor that had evidently been brewing.

Working off their 2009 effort, Eating Us, and 2007’s Dandelion Gum, the group unwrapped their set with subdued cuts of “Dark Bubbles” and “Tooth Decay”. Almost immediately, there was an unspoken understanding that no one would dance, but instead experience a night lit with shadows, illusion, imagery, and darkness.

Graveface stood out throughout the gig, hitting choice bass beats with woven perfection, while “Sun Lips”, as vocalized by Tobacco, was a subaltern experience with the vocoder amplified to an inhuman degree. ”Forever Heavy” began with a long instrumental intro before dropping, and the entire song was slowed down to half its original recorded speed. It was the night’s best moment; enlightened, epic, cinematic.

Playing a short set that was only a little over an hour, Black Moth performed amongst varying background visuals: a playground nearby a nuclear processing plant, a man sitting in a graveyard, woods shaken by an imaginary breeze. To this, the W.H. Auden quote, “A culture is no better than its woods,” came to mind. Their visuals were choice, especially given their mysterious, reclusive nature from society – and in a subtle way, their creativity became a form for influencing the world and commenting on the paradoxy of everyday life.