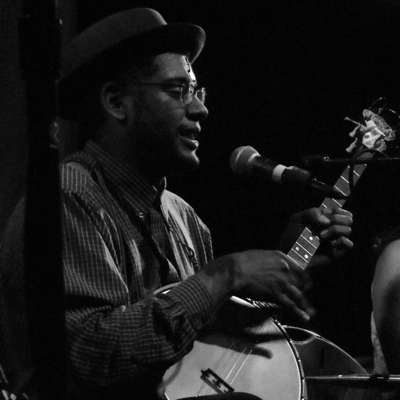 Nowadays, multi-instrumentalists get ultimate respect. So many musicians play exclusively one instrumentor no instrument, in the case of DJsthat anyone who can work more than one piece of equipment is revered. By those standards, the Carolina Chocolate Drops are gods among mortals. Stage setup for their set at Chicagos Lincoln Hall took longer than expected but was at least entertaining to watch: The expected assortment of guitars, banjos, and fiddles were joined by a cello, jug, bones, mouth harmonica, marching bass drum, and a couple of stringed variants whose names escaped the audienceliteral piles of instruments.

Following a friendly warm-up by openers Bhi Bhiman and Po Girl (the former wearing a tie and a serious face while singing about cheating lovers, the latter duo enthusiastic and summery on the ukulele, also busting out the clarinet, accordion, and single-string gut-bucket bass), the Chocolate Drops took the stage to a sold-out house and wild whoops.

Experimentation was the rule of the night. Founding Drops members Dom Flemons and Rhiannon Giddens introduced more recent additions Hubby Jenkins on guitar and mandolin and cellist Leyla McCalla to the crowd, and the night felt like a gathering of friends as the foursome switched instruments and swapped roles.

The Drops often play seated, which might sap the energy of a lesser group, but their brand of high-octane, fiddle- and banjo-driven folk is unstoppable. Its straight black coffee for the brain: classic, strong, and jumpy, traditional and well made. Your grandparents couldve enjoyed it, and its every bit as accessible today.

Set highlights included Giddens unleashing her heart-stopping alto on No Mans Mama, a sassy lounge number that had all the ladies hollering encouragingly, and later shouting breathlessly on the Gaelic mouth music piece that was closer to beatboxing than singing. Flemons went wild on the banjo on Viper Man, hands flailing up and down the frets as he pulled off amazing slides.

In addition to their high-energy style, the Drops are famous for being faithful to historical music and traditions. For old-time number Briggs Corn Shucking Jig/Camptown Hornpipe, off their recent release Leaving Eden, the Drops stopped the show altogether, and while Giddens tuned her recreation of an 1850’s banjo, she and Flemons gave a mini-history lesson on the music to come (with Flemons going so far as to give book recommendations for the curious). Though the story involves blackface and the minstrel era, Giddens reminded us that its important to know where [the music] comes from. Then, ever mindful of the energy, Flemons and Jenkins had an impressive (and silly) dance-off with the bones over the banjo’s distinctive, plaintive pluck.

The set burned on for nearly two hours, highlighted by floor-stompers like a cover of Johnny Cash’s Jackson and a reworking of the classic track Hit em Up Style, the latter of which saw Giddens improvising embellishments on the fiddle melody. The encore featured crowd favorite Cornbread and Butter Beans before ending with the a cappella call-and-response of Read em John. All four Drops stood for the finale, clapping and stomping along in time as the crowd joined in. Lively, talented, and smart, the Carolina Chocolate Drops remind us that theres more to music than the bitches-and-money trope. Plus, theyre just plain fun to watch.