Video: Jay-Z and Kanye West – “No Church in the Wild” 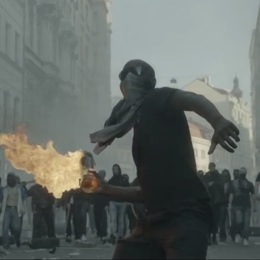 Jay-Z and Kanye West just kicked off the UK/European leg of their Watch the Throne tour, and now they’ve unveiled the video for the album opener, “No Church in the Wild”. Director Romain Gavras satiates all those shock enthusiasts still disappointed by the mild turnout at the recent NATO convention in Chicago with molotov cocktails, riot gear, and ravaged shots of Prague. There’s also an elephant. Watch the video below.