A Place To Bury Strangers – Worship 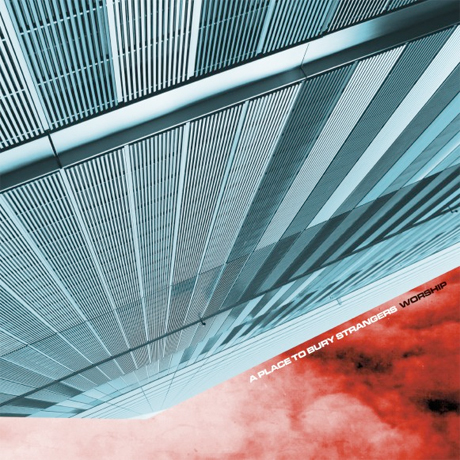 Noise is almost inevitably part of the equation when it comes to churning out good rock and roll. But while most bands accept it as a simple byproduct of their overall sound, others like A Place to Bury Strangers treat screaming wails of feedback and ear-bleeding distortion as means to their own end.

The band’s unhinged brand of shoegaze-y noise rock has made the New York trio one of the more polarizing bands in the indie rock underground in recent years, leaving listeners barely any wiggle room to choose between joining those who love them and those who run for cover. It’s a tough, deliberately narrow niche the band caters to, and the music draws a pretty fine line in the sand. Worship, the band’s third full-length effort, won’t do much of anything to swing fans one way or the other. If anything, it only makes the line more defined. The loyal followers will keep on preaching, and their detractors had best keep running.

A Place to Bury Strangers aren’t the first band to mine musical artillery out of sheer guitar drone and squalor. That territory has been worked over by the likes of The Jesus and Mary Chain and My Bloody Valentine, bands that worked out the art of sculpting terse, cranky noise rock soundscapes. A Place to Bury Strangers are unlikely to ever fully escape the comparisons to their forbears, but the trio has done quite well for themselves lurking in the shadows of such indie rock royalty. Their many, many singles and 2009 full-length debut, Exploding Head, laid the band’s stock and trade bare, dishing up loud but visceral bits of shoegaze with a gothic twist, leaving many to rightfully consider them heirs to their predecessors’ shared throne. And the band apparently likes where it stands, at least that’s the impression that’s given on Worship. The album doesn’t bother with moving them in any new direction, but rather serves as a well-aligned extension from the band’s prior offerings.

The band’s traits are on full display on album opener “Alone”, which comes complete with dense, robotic drumming, fuzzed-out bass, frontman Oliver Ackermann’s aloof, sing-speak vocals, and, of course, copious amounts of coarse guitar work. The wide swath of the record’s remaining tracks cover similarly raucous ground. “Mind Control” gets gloriously lost in layer upon layer of face-melting distortion, while “Why I Can’t Cry Anymore” is a doom-rock track groomed for the apocalypse.

Other songs, though, show some surprising restraint in stretches. “You Are the One” threatens to keep the band’s noisier inclinations at bay, at least to start. The drums pitter pat subtly, while Ackermann’s guitar wafts spaciously over his understated, muted vocals, all before the band returns to its haunting noise rock ways. Even more disarming are dream popish tracks like “Dissolved” and “And I’m Up”, which, despite scaling back the hemorrhaging decibel levels, still sounds as tense and brooding as anything else Worship has to offer.

But therein lies the record’s beauty, and, really, that of the band in general. First-time listeners will likely find Worship a grind to get through, and even those with ears more acutely tuned to the band’s mind-melting, wall of noise style might not make it through the whole album in one listen. Fortunately, the release unlocks more answers and offers up more rewards with each additional listen. Beneath the cacophonous rumbling on the surface, the music is actually very lush and textured, even in its own spectacularly loud way. Worship, like Exploding Heart before it, is a grower, music that only truly reveals itself with time, attention, and lots of repeated listens.

But it’s worth it. History has shown that time is often kind to bands of the shoegaze/noise rock variety. Few people knew quite what to make of albums like Psychocandy and Loveless upon first release, but they’ve done pretty well for themselves over the years. Listening to Worship, there’s no reason to doubt that the band and the record could one day find themselves in similarly high regard. By hitting a striking balance between the jarring, the eerie, and the oddly sweet and ambient, A Place to Bury Strangers have offered up another winning album that, while hardly the most pop-friendly record you’ll hear this year, proves itself worthy of revisiting.

Essential Tracks: “Mind Control”, “And I’m Up”, and “Dissolved”