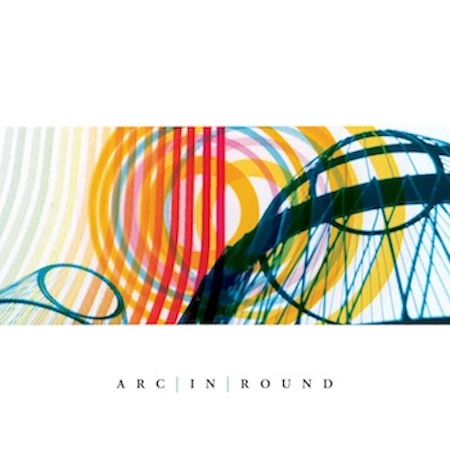 Arc in Round’s self-titled debut fits snuggly within the upper echelon of the neo-psychedelic pantheon. The album’s accentuating effects and swirling, hypnotic layers of dissonant noise–built like sonic bricks to shelter the songs’ true melodic core–is Arc in Round’s signature design, a sound that the band has cultivated for over seven years. After two EPs (2010’s Diagonal Fields and last year’s II), the Philly foursome pick up right where they left off, revealing a natural evolution from able-bodied shoegazers (then known as Relay) to a well-oiled, fully-realized, creative rock force.

Arc in Round’s creative energy begins and ends with Jeff Ziegler (producer/engineer for Kurt Vile, Lymbyc Systym, The War on Drugs), whose studio prowess elevates the band much the same way that Martin Hannett stylized Joy Division’s work. With a lineup of Ziegler, singer/keyboardist/co-songwriter Mikele Edwards, drummer Matt Ricchini, and bassist Josh Meakim, Arc in Round’s new material touches on anthemic rock, post-rock, shoegaze, and experimental post-punk, all while leaving gobs of its textured DNA on each song.

The album kicks off with “II”, a swirling and hurried nod to the aforementioned Hannett and Joy Division, where sounds appear and dissolve into one another without much surface chaos, like musical plate tectonics. “One-Sided” reveals Edwards’ ethereal, Laetitia Sadier-like vocals, an apt vocal channeling for this surging dream pop piece. The song also serves as a perfect example of Ziegler’s ability to create, with amazing subtlety, an undercurrent of beautiful foundational noise. Following the Joy Division-Sonic Youth hybrid construct “Said Astray” is “Volume Sets All the Time”, the album’s standout track, a transition-fueled carousel led by Edwards’ wearily commanding pipes.

Arc in Round’s debut LP is composed with sophisticated layering of sonic barriers, though a persistently heavy mood and vibrant bursts of beauty classify it as a genuine pop record. Song to song, the band undresses its influences, leaving the atmospherically moody music of 30 years ago stripped naked, only to be redressed in the band’s style. Although they lean some on their predecessors, Arc in Round will remain a band’s band–an unknown pleasure for wayfarers to discover.

Essential Tracks: “II”, “One-Sided”, and “Volume Sets All the Time”