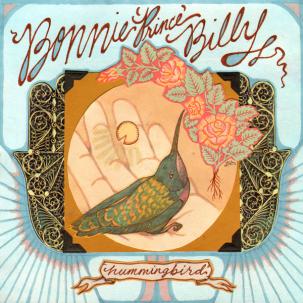 Sometimes it’s disturbing to accept that Will Oldham (AKA Bonnie ‘Prince’ Billy) is a real person, made of the same fibers as the rest of us. But once we come to terms with that impossibility, we then have to wrap our heads around the concept that he is only one real person, not a collective of people responsible for all of the things he allegedly does. Look at 2012 as an example, which has already seen the release of one single, a mind-bending collaborative LP with Trembling Bells, another gospel-inclined collaborative EP with Marie Sioux, and now the Hummingbird EP, a perfect nugget of folk-country covers, framed by two separate covers of Leon Russell’s “Hummingbird”, because why not? Here Oldham displays just a few of his many selves, and they all help paint a picture of a guy who does himself the best, no matter which self he picks.

On “Hummingbird”, Oldham revisits Russell’s song with icy-cool swagger, delicately jaunting through a song most famous for its singer’s elongated, soulful yelps. This version is an organ-funk groove, with the gentler, more refined Oldham behind the mic, a super-slick croon that could wow Ryan Seacrest and Justin Vernon in equal measure. With organ by ”Farmer” Dave Scher, the backwoods funk of the Entrance Band, and a bass line by Paz Lenchantin (A Perfect Circle, Zwan, and The Entrance Band), Oldham stomps through the once-desperate love song with a sort of chilled confidence that knows its hummingbird won’t fly far, even as its words beg her to stay.

Later, Emmet Kelly (The Cairo Gang) and Oldham duet on the sparse gospel standard “Tribulations”. “When the fires come down from heaven, and the blood shall fill the sea,” they intone, and if Oldham and Kelly aren’t carried home by Jesus, I’m not sure anyone will be. Their porch-front harmonies bleed with sincerity. Oldham is shaky with sorrow here, in subtle contrast to the EP’s title track. Later, Oldham and Co. slow burn through a particularly bittersweet cover of Merle Haggard’s “Because of Your Eyes”. The pedal-steel drags a gravely, whispery Oldham through ripples of weighty keys, swells, and acoustic guitar.

In just 15 minutes, BPB takes us through his many guises–from funk crooner to Southern Baptist preacher to Palace-era croaker–before closing it all out with a desperate, cool, calm plea. “Don’t fly away,” he begs in the title cover’s reprise. At least he can be sure we never will.