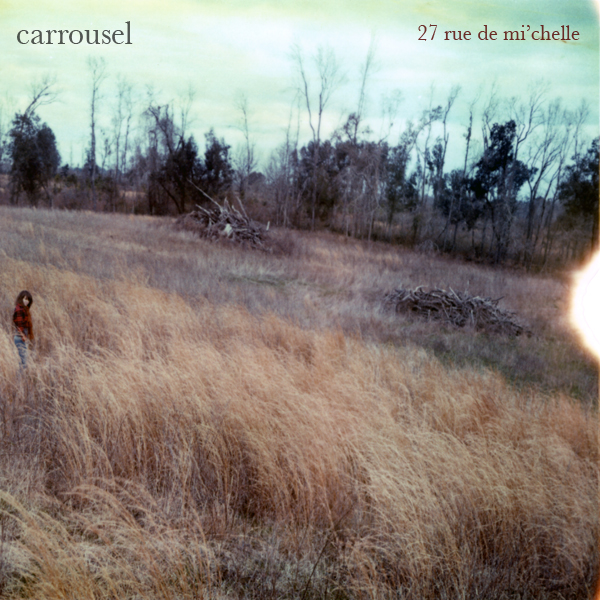 Back in November, Tallahassee’s resident dream pop band Carrousel churned up plenty of buzz with their expansive debut EP, Darling. Now the band returns with their full-length LP, 27 rue de mi’chelle, which pushes the spaciousness of their 1940s Europe-inflected acoustic folk into high gear—though at moments, it’s almost too high.

All three songs from the EP are thankfully included on 27 rue de mi’chelle, with addictive waltzer “Darling, You’re So Mean to Me” as a bonus track at the end. The band’s at its best in a focused format but loses traction when they start to noodle into atmospherics. Some of the stronger moments include the one-two punch of the explosive “14” and the rolling thunder of “You Only Love Yourself”. The latter’s bombarding tympani, low chanting, and tightly harmonized chorus are especially magnetic. Quieter standout “(15)” is the band’s strongest track yet, and it fits snugly between slower tracks like “Take Me Now” and “27 rue de mi’chelle”.

However, these high points are grouped with seven other win some/lose some tracks that at times overextend their welcome. The purely instrumental tracks, “Idée Fixe” and “In Her Tomb by the Sound Sea”, for example, feel out of place and do nothing but slow the album’s pacing. “Idée Fixe” as the album opener isn’t as bad as the placement of “In Her Tomb…” in the middle of the album— an especially disjointed moment that comes after the mariachi trumpet closing on “Where Do We Go From Here”. If they wanted to drop a few notches, Carrousel may have been better served with a simple, slow, acoustic ballad in the vein of  “(15)”.

27 rue de mi’chelle is, on the whole, a somewhat fractured debut LP. The tracks that rollick do so with smirk-inducing, stomach-warming abandon. Carrousel has a gift for crafting concrete harmonies that can make your hair stand on end. These moments are overshadowed, though, by the slower, meandering extras that seem to show a lack of direction in the songwriting. The more focused they can get in later work, the more fluff they can cut out.