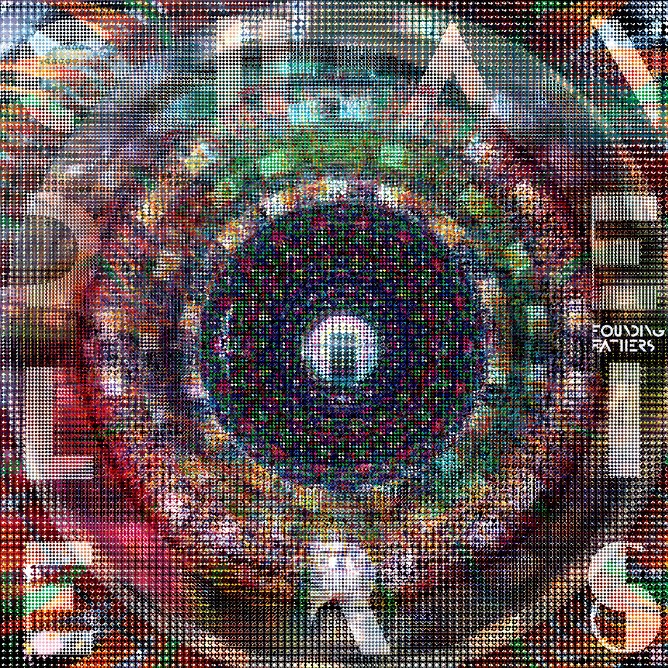 As the century turned, the bunching of artists and bands that lived in, recorded in, or played at the The Shape Shoppe became one of the most important musical scenes in Chicago. The loft space in the South Loop was home to city-wide heroes like Icy Demons, Mahjongg, and Bird Names, until an over-publicized “secret” show by Dan Deacon led (at least partially) to the place’s closure in 2010. Even though The Shape Shoppe may no longer exist as such, it’s clearly alive and well in the new album of another band that used the space; the kinetic, experimental, organic electronic energy on Chandeliers‘ Founding Fathers is emblematic of the power that scene once held.

Though the tracks on the group’s fourth LP rely on analog electronics, there’s nothing retro, nostalgic, or robotic to be seen. Every bleep, bloop, and whir combines to make something entirely organic and fresh, coming together like a cloud of buzzing electronic insects shimmering in a breezy dusk on “Domain of Wonder”. Even at their synthiest, a flourish of effected guitar or a moan of vocals blurs every line between machine and operator. The haunting coos on “Tropical Pocket” perfectly counter the staccato pulses and slippery synth percussion.

Though there are certainly memorable tunes and grooves that pump up the energy, Chandeliers capture a truly entrancing quality in their music. They’re sending you to an endless, technicolor dancefloor that curls and wavers like ocean waves. The yo-yo synths and shuffle-step rhythm of “Singularity” make for a feel that demands to be repeated endlessly at a too-good-to-be-true after-hours club. The vocals throughout are either wordless or near-to-it, propelling responses and emotions rather than domineering the experience.

In songs like opener “New Times”, Chandeliers take on that Holy Fuck mentality, producing an incredible techno beat on their own instead of letting computers relegate things. The live drumming, stuttered guitar plinks, and prodding synths spinning into new keys rather than quitting. There’s a human depth every step of the way, a rare accomplishment for an electronic album; these excellent grooves latch on to the soul because they have so much soul on their own.