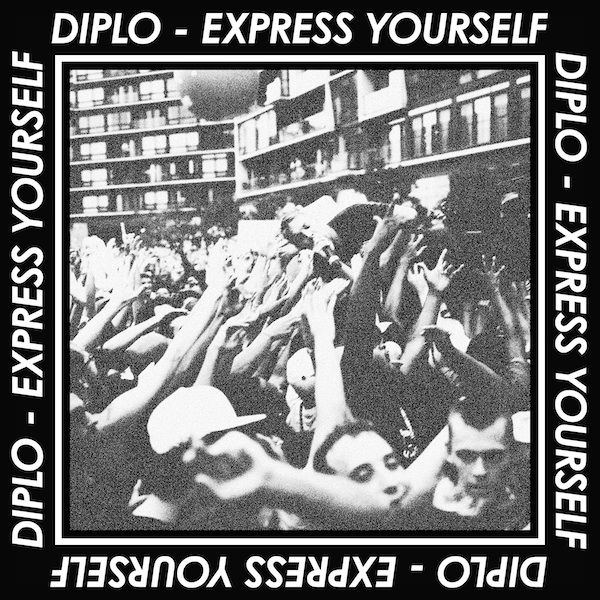 Without a doubt, 2012 has been the year of Diplo. Between producing a track for hype-mongerer Azealia Banks, touring with Grimes and Skrillex, and scattering releases from his alter-ego Major Lazer, the man is inescapable. He even released a book. With quantity doesn’t necessarily come quality, though, as we discover pretty quickly into his latest EP, Express Yourself.

The approach to Express Yourself‘s six tracks, for better or worse, mirrors Diplo’s more recent live sets. Instead of taking the time to develop a groove a la “Percao”  from the Decent Work days, we’re given instant gratification. While still incorporating dance hall beats, the songs build too quickly from their mellow starts and various featured vocalists to schizophrenic explosions of warbled bass, leaving us to wonder if we even earned the drop.

That being said, Express Yourself is not a wholly bad collection of songs; half of them showcase Diplo’s characteristic ear for taking disparate pieces and creating a coherent whole. The title track kicks things off strongly, with its dizzying vocals from up-and-coming bounce rapper Nicky Da B, whose choppy flow feels right at home among the simple beat and chorus of lasers. “Barely Standing” follows and is the definite highlight of the group. Canadian dubstep producer Datsik’s appearance on the decks and Sabi’s sultry vocals flow with Diplo as the intermediary, working successfully to meld the two into a sure-to-be club banger.

The EP derails during its second half. “Move Around”, featuring Elephant Man and GTA, plays like a Major Lazer song gone awry. Instead of a beat that Beyonce might steal one day, the song grinds on nearly to the point of being unlistenable. Closer “Set It Off” offers a little redemption with the extended build and phenomenally named guests Lazerdisk Party Sex, but after the tumultuous 25-minute listen, that potential redemption might instead be relief that the album is over.