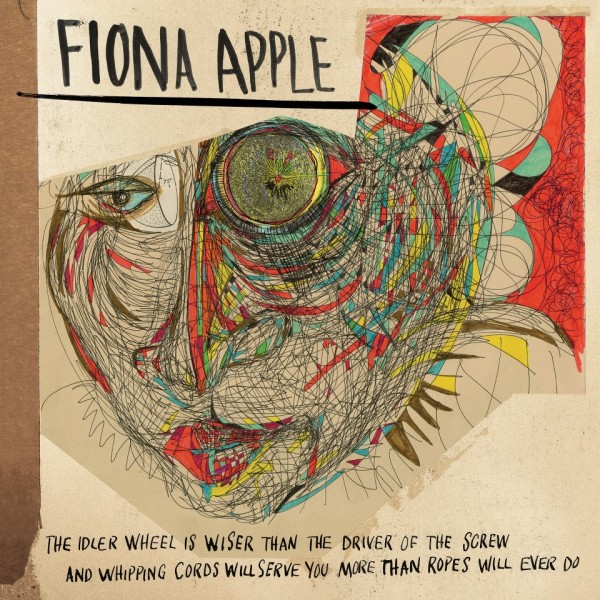 Fiona Apple is all about control: gaining, losing, regaining, relinquishing, feigning, being in and totally and completely out of it. Each of her previous albums has seen at least one pivotal battle of control: agency over her own 20-year-old body in the music video for “Criminal”, reclaiming her identity after a particularly unflattering profile in a magazine by writing a 90-word poem as her album title, and not-so-gracefully deciding who would produce her third LP, Extraordinary Machine.

On the opening track of her fourth LP, “Every Single Night”, still envisioning herself as a kind of machine, she sings, “My heart’s made of parts of all that’s around me/ And that’s why the devil just can’t get around me.” The mechanical theme continues with the unabridged title of this album: The Idler Wheel is wiser than the Driver of the Screw and Whipping Cords will serve you more than Ropes will ever do. Parsing this out, an”idler wheel” is a passive gear turned by a driven gear and used as a connector to other parts of the machine, and “whipping cords” are a kind of rope used to bind or lash other frayed ropes on ship.

So, now at the age of 34, Apple is starting to let go of the reigns and take stock of all of the things that are controlling her. Ugly little moments of jealousy, self-loathing, heartache, vengeance, and remorse all shine through on these songs. She may not be able to control the speed or the power of the action around her, but she knows her own extraordinary machine more than anyone else — even if it’s in a state of perpetual disrepair.

Apple wrote the album with mainly her tour drummer and multi-instrumentalist Charlie Dayton, and rarely does it sound like there’s more than two people making music on these songs. Together, they map out the sounds on The Idler Wheel, where thigh slaps, pillows, and ambient loops serve to fill in the cracks between Apple’s piano. One song’s percussion always varies from the next, subtly adjusting to the tone of Apple’s lyrics. “Jonathan”, a lament about a trip to Coney Island with her ex-boyfriend, is backed only by a ghostly loop of a brushed snare, distorted and faded in the background. At the end of “Periphery”, more of a kiss-off song than anything else, duct tape is ripped off a surface in rhythm for a sound that just makes you grab your skin to make sure it’s still there.

A lot of these songs appear like bloody, mechanical effigies of herself. They are ugly reflections of Apple on display for all to see — and there for her to just set on fire. She’ll write herself into an untenable situation, like on “Left Alone”, about finally meeting the right guy and being intrinsically deficient, because she’s “too, too hard to know.” The frustration here isn’t simple and sure isn’t new — she doesn’t cry any more because “Tears calcify in my tummy,” and she isn’t even afraid because “Fears go inside the bottle.” The realization Apple may be destined for heartbreak is almost too much for her, ripping her voice out and making her scream, ”How can I ask anyone to love me/ When all I do is beg to be left alone?”

But tones and moods swirl and shift ominously on the record. The intravenous emotion of a song is always ornamented and tempered by lovely little Apple-isms. Even the most buoyant track, the closer “Hot Knife”, somehow turns “He excites me/ Must be like the genesis of rhythm” into something non-cringeworthy because the world of the album is so clearly defined specific images of “moribund sluts” and Apple “tugging on your forest chest,” and the whole heady conceit of the song “Periphery”.

The Idler Wheel succeeds in creating a singular world more daring than any of Apple’s previous records and one of the most daring pop records in recent history. The risks she takes hardly even seem like risks for her anymore because the album is so well-oiled. Even the littlest of moments have Shakespearean stakes, and each song essentially exists in the fight or fuck space of music. She’s in control, but she just wants to feel every little thing in her world and see what happens when all the gears of pain, love, and sex finally stop grinding and start to turn each other. It’s only the mechanical parts of her music that can be ugly and painful — the sum of all the parts is just beautiful.