Grace Potter and the Nocturnals – The Lion The Beast The Beat 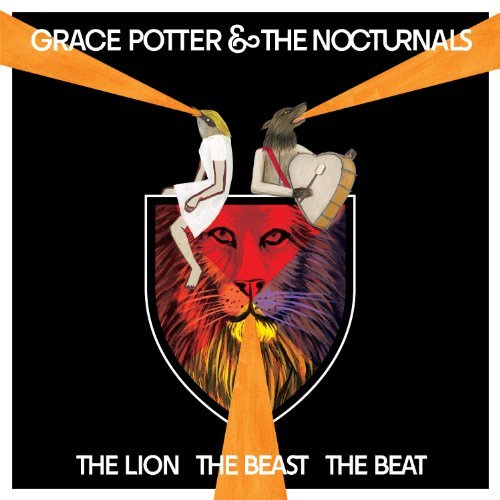 In 2010, Grace Potter and the Nocturnals released a self-titled third studio album. Though met with commercial success, its critics were clear: The album was safe, shallow, and thematically redundant. As Consequence of Sound’s own Stephen Foster wrote in his brilliant review of the album: “Right when you think Grace Potter is headed down the path of expansion and progression…she pulls back the reigns.” When one thinks of Potter, a few words or phrases naturally come to mind: “leggy”, “country music”, “voluminous voice”, to name a few. She is innately a performer, a reincarnation – or more accurately, a reinvention – of that fun time when bands like Heart threw a wrench into the machinery of rock and roll, breaking the conventions of a male-dominated entertainment industry. But despite her legendary vocal presence, despite her contributions to the country rock genre, a few qualms remain – Grace Potter and the Nocturnals seem to possess a lot of potential as a band, so why has their music stagnated? What happens when Potter and her band try on a new word for size – “experimentalism”?

The latest album by Grace Potter and the Nocturnals, The Lion The Beast The Beat, thankfully endeavors to try something new. Potter’s vocals are gorgeous as always, but the overall tone of the Nocturnals has arguably changed — forgoing country for experimental rock, they’ve also successfully woven electronic influences into the mix. Though this doesn’t uniformly characterize the album, the few tracks that do stand out represent a possible future path for the band. And indeed, the results are accessible (while steering away from the mundane or repetitive) and fresh (what we all hoped for).

The album’s title track starts us off, featuring an enticing instrumental entrance similar to Beach House’s “Myth” on Bloom. Though the song finds itself plagued by some cheesy one-liners (“I found the heart of a lion/ In the belly of the beast / and I held it in my hand / And I could feel, I could feel / The beat”) just like Potter’s past songs (think: “One Short Night” off her last album), the beginning procession is strong and determined, highlighting how the Nocturnals’ instrumentals are starting to wade into new waters. Likewise, “Parachute Heart” sounds far too familiar, while “Stars” has a promising start as an acoustic guitar track before the lyrics creep in: “I can’t look at the stars/ they make me wonder where you are/ up on Heaven’s boulevard.” Add the piano accents, and it’s way too sappy for its own good.

“Turntable” and “Timekeeper” are slightly more divergent, and can be appreciated because they’re essentially fun tracks. However, the imagery woven into both songs is pedantic and literal, with “Timekeeper” actually featuring the sound of a ticking clock, and “Turntable” also predictably featuring the sound of a record player’s needle gritting against vinyl. Despite that, “Turntable” really deserves to be a song you blast when no one else is home, sung at the top of your lungs, preferably in your underwear. It sticks in your head and threatens to lock itself inside there forever.

Although the majority of the album is indeed predictable, the band did take some risks. A whole plethora of influences are infused in the album’s best tracks, and the band’s forays into new forms reap true rewards. “Never Go Back” isn’t condemned to “cutesy pop”; rather, it’s womanly, full-bodied, sensual, funky. It’s what Potter needs to produce more often as a rule, and it’s more electronic-influenced than anything she has really done before. “Runaway” is similar, and has a beat that is very Toro y Moi. “Loneliest Soul” is a mix of weird, distorted, but charming, rockabilly and punk. It’s rambunctious and a bit erratic, but in the end it pays off. “The Divide” tinkers and twinkles, and it proceeds into a guitar riff – and later a guitar solo – that is astoundingly similar to Zeppelin’s “Kashmir”.

Like what we’ve seen of Grace Potter and the Nocturnals before, the prevailing theme here is one of change. In the moments where the band flexes their creative muscles, where they show that they’re absorbing different influences – especially experimental touches, like subtle electronica and funk – they produce music that is undeniably more tender, genuine, and interesting. It’s not that Grace Potter and the Nocturnals need to change themselves — it’s more importantly about urging the sort of musical reflection and introspection that makes a band continue evolving.

Essential Tracks: “Never Go Back”, “Loneliest Soul”, and “The Divide”