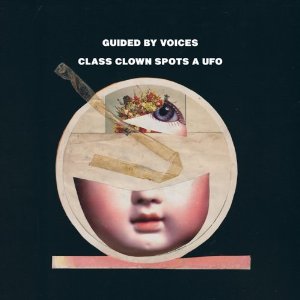 The reunion is over.

No, Guided by Voices haven’t broken up again. This is still the group of five men who once played music together for a string of important albums in the ’90s, but the sheen of a classic GBV unit reconvening for a brand-new album (January’s Let’s Go Eat the Factory) and tour has largely washed away. The gleam messed with our perception a bit, as the drink no doubt messes with singer/songwriter Robert Pollard’s during every live performance. So, as we swig away and listen to the band’s second LP of the year, Class Clown Spots a UFO, we’re left with just that: the second LP of the year by the rock collective known as Guided by Voices. And there’s nothing wrong with that.

One-minute-or-less tracks? Check. Lo-fi recordings? Yep. Songs penned by guitarist Tobin Sprout? You betcha. While Class Clown doesn’t come close to the highs of Alien Lanes or the vastly underrated Universal Truths and Cycles, it still riffs and rolls enough. The record has that special amount of DIY attitude that’s hard to disagree with, that extra beat of the heart that keeps pumping through the speakers.

Pollard can still craft a tight track lasting under three minutes. Look no further than the spinning pinwheel pop of “Billy Wire”, a track that could fit comfortably on any record in the band’s archive (along with its lead-in, the fast and furious “Roll of the Dice, Kick in the Head”). Its slow build verse into the catchy chorus manages to call back to “Game of Pricks” with Kevin Fennell’s rat, tat-tat-tat-tat drumbeat. More modern sounds emerge from tracks “Jon the Croc”, with its wicked guitars courtesy of Sprout and Mitch Mitchell, and “Keep It in Motion”, with possibly the simplest lyrics you’ll ever memorize and a rhythm section straight out of Do the Collapse (different lineup, same result).

Sprout stole the show on Let’s Go Eat the Factory with the paradise that is “Waves”, and while his contributions this go ‘round aren’t as strong overall, he does have the album’s “moment” once more. Before that, it must be said that the tracks “Forever Until It Breaks” and “They and Them” sit without stirring. The band has made a career with songs that sound tossed off but still resonate. These two tracks in particular just sound tossed off, with plodding musical accompaniment. However, when Sprout digs deep into the jangly pop that flows in his veins, the results are much more satisfactory. There is a moment in Sprout’s “All of This Will Go” when it happens. It’s difficult to pinpoint that exact moment with so many packed in such a neat, short track. Maybe it’s when the vocals converge to create that harmony at the end of the verse and into the chorus? The “tut-tut-tut” bit? Those guitars? Those repeating guitar lines are so fucking good, that to substitute the words “fucking good” with any others would seem disingenuous. The guitars are so good, so simple, that one remembers why they fell in love with music in the first place.

With high praise in the rearview, we can’t avoid the damage ahead. Many of Pollard’s blink-and-you’ll-miss-‘em numbers aren’t as strong as we’ve come to expect from him. “Fighter Pilot” and “Worm with 7 Broken Hearts” are much like Sprout’s failures on the album. The danger with these songs, no matter how long or short, is that they threaten to derail the album if they come up too frequently. While this debris does appear every once in a while, express lanes always seem to appear on the horizon. The title track features a harmony arrangement so uplifting that it owes more than a little to Brian Wilson, and the acoustic gems “Chain to the Moon” and “Fly Baby” could soothe those with the worst of road rage. I’ve now run out of car analogies.

Class Clown Spots a UFO doesn’t pretend to make any statements. It comes from a rock n’ roll band led by Robert Pollard. There is no need to dress it up; it wants to be left naked. There are lyrics in the Sprout-penned “Lost in Spaces” that best sum up the band’s newest release: “I’m not sure what it means/But I like it,” or even “You make great things better/ From these things I’ve never known/ Still me.” This is still Guided by Voices. Just a band out of Dayton, Ohio.

Essential Tracks: “Class Clown Spots a UFO”, “Billy Wire”, and “All of This Will Go”