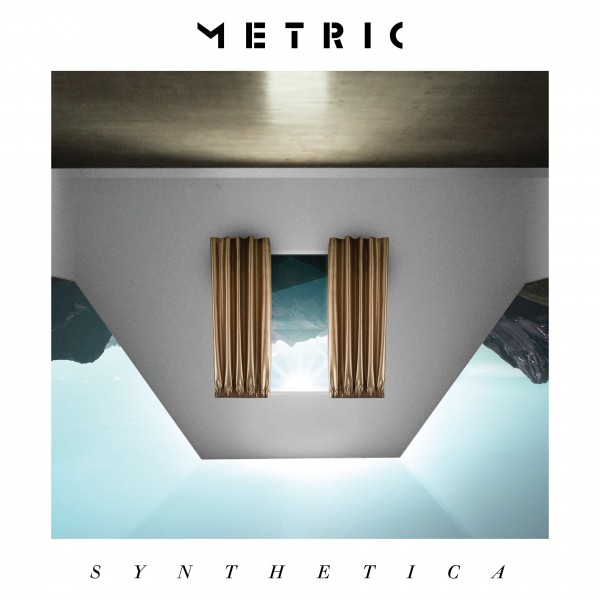 Upon hearing Old World Underground, Where Are You Now? for the first time nearly a decade ago, my first concern was an inability to discern why Metric wasn’t more popular. Specifically, why was I only hearing them on the campus radio station and not on a commercial channel? The band offered the best of both worlds between catchy pop music and politically-charged indie rock, and continued to blend accessibility with the experimental on their subsequent albums. Along the way, Metric’s mainstream appeal caught on while the band went the self-release route, and their fifth and latest album, Synthetica, has arrived to answer the question: “What happens now?”.

The ever-present sinister undercurrent to Metric has always been at odds with the light of their pop sensibilities. While optimism eventually took the lead on 2009’s Fantasies, Synthetica represents a descent, and that dark side is now more ominous than cynical. When Haines sings lines such as “I’ve got something no pill could ever kill” on the title track, it’s with a feeling of triumph over a world of artificiality that sacrifices individuality, as the fast-paced power pop musical backdrop evokes a hurry-before-it’s-too-late sense of urgency. Drum beats that march towards doom, cascading synths, and apocalyptic lyrics paint a crumbling dystopia on “Speed the Collapse” but build to a toe-tapping, head-nodding liberation, complete with “aah aah aah” singalong vocals.

Gritty lead single “Youth Without Youth” is a refresher on everything that has made the music of Metric so endearing for the past decade. The latest in a grand tradition of short, punchy synthpop smashes filled with hooks, “Youth Without Youth” brings something different to the formula this time around in the form of a glam-gone-industrial vibe that juxtaposes Gary Glitter with  Marilyn Manson circa Beautiful People. Here, Metric’s perpetually socially aware lyrics go down with the spoonful of sugar that is the equal parts sweet and scathing voice of Haines.

Exuding both mystery and wonder and dropping from soaring to breathy, Emily Haines’ vocal stylings are always the centerpiece of a Metric album and its equally dichotomous musical themes. Synthetica is no exception, but here they are processed with purpose, such as with the unworldly distorted backgrounds of “Youth Without Youth”. On opener “Artificial Nocturne”, the Haines’ delivery of opening lines “I’m just as fucked up as they say/ I can’t fake the daytime/ I found an entrance to escape into the dark” strips the humanity from the song and enables the squalid throbbing synth line to set the tone for the album. One of Synthetica’s most charming moments comes when Haines adapts a high-pitched, child-like soprano for “Lost Kitten”. Not only does “Lost Kitten” bring to mind Grow Up and Blow Away, but it’s also a testament to the element of whimsy that’s so rarely found in pop music today.

The manufacturing plant that is Synthetica is not without its flawed models, where something went amiss during the process of manufacturing. “Breathing Underwater” feels more like an example of overproduced pop, rather than any subversion of it, while dramatic tension escapes the layered vocals and fuzzed-out synths of “Dreams So Real”. Synthetica’s penultimate track “The Wanderlust” features a cameo vocal appearance by Lou Reed, and like everything else Reed has touched in recent years, “Wanderlust” is noteworthy purely for the curious novelty factor and little more. While Reed’s vocals do noticeably respond melodically to Haines’, rather than standing as a total anachronism, the disparity never becomes a fully working one, and the track would be best served as a B-side.

So what is Synthetica? According to an open letter from Haines, it’s about “being able to identify the original in a long line of reproductions” and “what is real vs what is artificial,” while musically standing as “the sonic culmination of everything [they’ve] done.” On Synthetica, Metric explores the dark side of an artificial world, while simultaneously appropriating it and offering new twists on the band’s familiar aesthetic by turning away from their new wave roots. Synthetica is also the latest in a series of Metric albums whose greatness comes in moments, rather than being fully actualized.