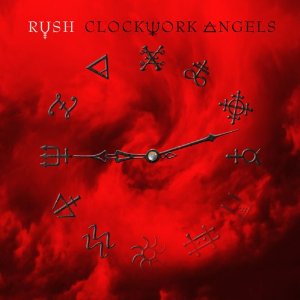 Canada’s honored knights of all that is progressive, rocking, and conceptual have finally released their long-awaited 20th studio album, Clockwork Angels. With it, Rush sets a great example of how a band with a colossal body of hallowed and revered work can age with grace and simultaneously remain relevant to the musical landscape of today. And while the holy trinity now grows a bit long of tooth, Clockwork Angels displays an unexpectedly edgier sound than we have yet heard from the band.

Clockwork Angels finds Rush making their triumphant return to doing what they have always done better than just about anyone: building albums with conceptual depth fueled by unabashedly cerebral ideas. To that end, Clockwork was grown from the seeds of 17th century French philosopher Voltaire’s most widely known and lauded work, Candide. For those not familiar with the philosopher’s magnum opus, Candide is a sarcastic musing on the meaning of optimism during trying times. While Candide is rooted in natural disaster, like the massive earthquake that struck Lisbon in 1755, Clockwork Angels’ storyline was inspired by Rush lyricist and drum deity Neil Peart’s own life experience in dealing with the tragic loss of both his daughter and wife within the span of a year, and more recently, the passing of his drum instructor, Freddie Gruber. Peart utilizes the basic skeleton of Candide to explore his own grief and optimism within the lyrics of Clockwork Angels, albeit via some very different aesthetic choices than those selected by dear old Voltaire. The album’s tale follows a young man’s sojourn through a steam-punk inspired dreamscape, rife with adventure, fantasy, carnivals, and whimsical characters. While the concept of the album is a strong one, it is presented in a more lyrically subtle way than what one may have come to expect from other Rush experiences.

Muted lyrics aside, the sonics of Clockwork Angels stands proudly as some of the most aggressive to date for the trio. The album’s second track, “BU2B”, finds the band residing in a near heavy-metal realm of chunky guitars via a math-informed breakdown of a verse that brings back memories of Alex Lifeson’s 1996 Victor album. And the ’90s strain of heavier rock flows deeply through other tracks on the album as well, though it’s all done with the taste and panache that Rush has trademarked.

All three of Rush’s virtuosic musicians can still play with the kind of precision and athleticism that originally put the band on the map, and even more impressive than the playing is just how well lead singer Geddy Lee’s voice has weathered the years of touring and recording abuse. Though the highs are not quite as high, Lee still possesses a ridiculous range, and lead single “Headlong Flight” shows off his pipes in all of their high-pitched glory. The album boasts more than a few numbers that will sound absolutely monstrous on the full U.S. tour the band intends to embark upon in support of the record. “Seven Cities of Gold”, in particular, blasts off with all of the hallmarks of a great Rush song; from Lifeson and Lee’s synchronized riffing, to Peart’s driven and ever-so-flashy drumming, the track exemplifies the best parts of the entire album.

For Clockwork Angels, the band has returned to Snakes and Arrows producer Nick Raskulinecz, and his touch may very well account for a great deal of the album’s heavier sound. Raskulinecz’s production credits include albums by Foo Fighters, Evanescence, and the Deftones, and while his production does make for a loud, clean, and present album, it works against the quality of the songs at times. As fellow Raskulinecz production client Dave Grohl said in his 2012 Grammy acceptance speech, “the human element is what’s important,” and for all of the grandiose and pristine sounds heard on Clockwork, there is a certainly something missing from the sonic recipe. Though a specific culprit eludes blame, it simply feels as though the modern production values can, at times, rob the trio of some of their personality.

On the other hand, the glossy production, in conjunction with the edgier songs, may be the push the band needs to court younger fans. Like fellow prog-rock titans Yes and their Big Generator album, Clockwork Angels is an album with progressive sensibilities that can be easily digested by just about anyone looking for a good rock song, and may even yield a major hit or two. However, the added bonus here is that while each song can stand on its own, the album as a whole– with its conceptual trappings and storyline– makes for an equally rewarding experience. Is Clockwork Angels the group’s magnum opus, a la Candide? No, but it is a killer rock record with a great story.