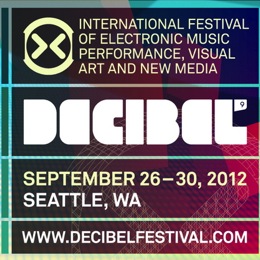 Other new additions to the bill include Balam Acab, MartyParty, Teengirl Fantasy, Shlohomo, Starkey, The Knocks, k. flay, Axel Boman, Appleblim, xxxy, Salva, Baauer, The Stepkids, and Orcas. You can see the complete lineup at the festival’s website.

In a statement, festival founder and curator Sean Patrick Horton said he intentionally avoided booking some of EDM’s current stars:

“Though Decibel has benefited from and even played a role in this growth over the years, the majority of our audience were supporting electronic music long before it reached the mainstream. In fact, it was the lack of acceptance that provided impetus for me to found Decibel in 2003.  Putting together this year’s line-up, I made a conscious effort to avoid jumping on the bandwagon and instead focus on a diverse  selection of artists that I feel have a unique and influential voice that spreads will beyond the  current hype. This was a calculated decision on my part and one that I feel will lead to lasting relationships with both our audience and the artists we support.”