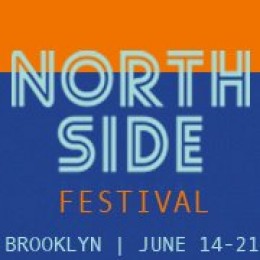 “I don’t know why I’m even here for this fly by night festival, but I love of Montreal,” said the irritated (yet excited) man behind me in line to get into Northside Festival’s ”main event.” While the third act for the big show was waiting to go on, McCarren Park’s blacktop was less than a quarter full as the people who should’ve been watching were stuck behind a fence waiting in line for 30 minutes. While Northside festival aims to reach the same caliber of showcase-based festivals such as SXSW and CMJ, something makes it miss the mark, despite a slew of popular, talented, and buzzworthy acts.

The big show consisting of Beach Fossils, The Thermals, Jens Lekman, and of Montreal was to be the first in the newly opened Williamsburg Park, but was unfortunately be moved to the far less aesthetically pleasing asphalt of McCarren Park. Not only that, but in their attempt to feel more like a festival and have all-day programming, this big show started at four in the afternoon. Combined with the terrible line situation, people who got out early from work were lucky even if they saw Jens Lekman’s last song.

Checking into Northside this year gave the impression that things had improved from last summer, their central hub was a giant warehouse with NORTHSIDE emblazoned on its side, food trucks all around, and a sunset behind it. Sadly, it seems like this was just a front for a poorly thought through weekend. At multiple points, my Northside badge was as useless as a fake ID made by a kindergartener. Most of the showcases sold out 90% of their capacity to normal ticket sales, letting few badges in. Even if I showed up early, often I was turned away from the show. This almost completely defeats the purpose of being able to hop between the multiple shows within a couple of blocks of each other. And no, Northside Twitter Account, a free Jameson lounge doesn’t make up for the fact that I almost missed “The Opposite of Hallelujah” — well, kind of.

Sadly, this led to me seeing a total of five good performances throughout the entire weekend. Sorry GZA, Starfucker, Screaming Females, Caveman, Frankie Rose, Olivia Tremor Control, Dinosaur Feathers, The Thermals, Beach Fossils, and every other band I missed out on. I tried. Thankfully, the following top five acts made the weekend entertaining.