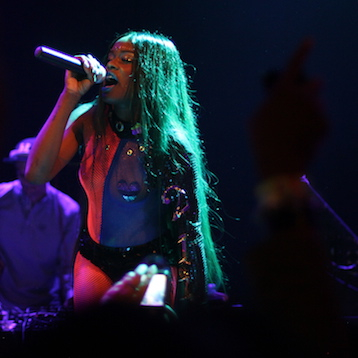 I’ve never felt more like I’d just crashed someone’s private birthday party. Then again, with all of the insane happenings last night at the Bowery Ballroom, I don’t think anyone noticed me me walking around. When there are drag queens dressed as mermaids (complete with tentacle fingers that Sharon Needles wore on Drag Race - shut up), people in full body suits, free cotton candy, and balloon animals, it’s hard to notice the kid walking around and taking notes, unless you hate cotton candy.

With half of the venue walking around wearing VIP stickers, and given the door’s multiple-page guestlist, it was almost as if only 50 lucky people snagged tickets to see Azealia Banks’ first “official” New York City performance. Even though she’s already extensively toured Europe (with only a couple of tracks floating around, no less), the Harlem native hadn’t previously headlined a show in New York City. Well, what better time than the weekend after her 21st birthday and the drop of her first official release?

Everyone in the venue seemed to either know Banks personally, or wished they did. No one cared that her set time was at one in the morning on a Sunday night with countless DJs and dancers opening the show – so, it became a glitzy ball of sorts. Because of this, I didn’t know where to plant myself, and instead, I bounced around the stage and the lounge, paddling between the sensory overload upstairs and the abundance of fashion-related conversations downstairs.

Luckily, I went upstairs right when Banks arrived at the venue. She walked from the back of the floor to her dressing room, parting the sold-out crowd like the red sea. Even the superfans, wearing “Barbie Shit” or “IMA REED” shirts, didn’t approach her, shout “I love you!”, or snap pictures. They just stood in awe as she walked through with a posse of at least 20 behind her. Then again, her appearance was quite intimidating. She wore a mermaid outfit with no top, covering herself with only starfish-shaped pasties – recalling Lil’ Kim circa 1999 – that basically screamed, “Back off.” That would shut me up, as well — it did.

As aforementioned, Banks went on at one in the morning, but to my disappointment, she had changed her outfit. The pasties remained but the mermaid get up was gone. However, it didn’t quite matter as the beat for the Diplo-backing “Fuck Up the Fun” dropped and Banks went berserk anyhow. Admittedly, I expected her to hit the stage, drop a couple of songs backed with a backing track, and deliver as much of a half-assed performance as someone with just a DJ and a couple songs likely would do. Thankfully, Banks hit us hard, and with a couple of extra right hooks.

Her performance was unbelievably confident and fierce, with the look in her eyes somewhere between Nicki Minaj and some warrior princess. As the show raged forward, the performance became a pre-emptive diss-track to anyone who would try to mess with Banks in the future. Try and imagine an enraged psychopath at their own sweet 16, burning gifts and tossing them aside, but asking for more. With at least 50% of each song consisting of lines that are essentially focused on a boisterous “I’ll destroy you” motif, Banks trademarked her own attitude and rolled out the moves to back it up.

On fast tracks like “Fuck Up the Fun” and new cut “Jumanji”, the crowd struggled to keep up with Banks’ flow, though they were able to follow along on “Barbie Shit” and “Liquorice”. Still, after about six songs, everyone knew what had to come next: “212”. The crowd favorite was like the New Years’ Eve countdown, and “Imma ruin you, cunt” was the payoff. I’ve never thought it’d be so fun (or safe) to scream those words with a crowd of 300 other people, but hey, when else do you get the chance to inoffensively yell that line?