Live Review: The Tallest Man on Earth at The Town Hall NYC (6/20) 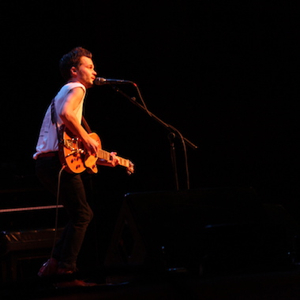 Kristian Matsson steps in front of an array of five guitars and begins to think. He points at each one, waves his fingers over the group, and then finally has a light-bulb moment as he chooses one of the five beautiful instruments in front of him. Who knows if this was planned– an instance of being cute in front of a (mostly) hyper-respectful, quiet crowd. A musician who is as precise as Matsson, aka The Tallest Man on Earth, should definitely know which guitar is for which particular song, but that pause was necessary. If anything, it affirms that his act is dynamic and not just a performance each night by rote. With so much precise fingerpicking and intricate fretwork, there’s little room for deviation. So, if there’s a chance that some slight tone will change each night with an impulsive switch of guitars, we’ll take it.

A Tallest Man on Earth show is, in theory, not much more than one expects. Matsson plays the songs like they are on the album for the most part, his voice spot on, occasionally a switch in dynamics with a louder yelp to finish a tune. The setlist sort of fades into one long song, save for the staples of “King of Spain” and “The Gardner”. And in this context, that’s perfectly alright. The songs from recent release There’s No Leaving Now, aside from single “1904”, were hard to pick out from the mix of older tunes, a familiarity between records that boded well for last night’s set at The Town Hall NYC.

While the setlist and Matsson’s precise guitar playing create a cohesive performance music-wise, it’s The Tallest Man On Earth’s commanding stage presence that makes the show much more than just listening to his records. He dances around the stage, usually on one foot, with an unnerving quality to him. Matsson will occasionally sit for one second in a chair, only to bounce back up, or sit for a whole song with a disclaimer, “This one’s harder to play than the others…” Mid-song, he’ll often stare with a borderline angry, intent gaze at a single member of the audience, which is slightly terrifying. One wonders whether those individuals meet his eyes, mouth the lyrics, or simply shut up and stare back.

Last night, Matsson broke the tension of his death-glare with jokes and humor between songs. “I’m going back to Sweden tomorrow, where the polar bears live”; “I just picked up a pick guys; it’s not hard, don’t cheer.” Later, “‘Freebird’? All my songs ARE about free birds.” One of the best moments came when a security guard flashed his light on a videotaping audience member repeatedly, and unbeknownst to him, Matsson was hovering over his shoulder staring at him while the crowd laughed.

But interspersed with all this levity and stage-presence were moments of beauty, both musical and emotional. The electric guitar tune “The Dreamer” was played on piano, slightly slower and with much more emotion. Matsson’s wife, Amanda Bergman, joined him on stage for the last tune to harmonize for “Thrown Right at Me”, the two in a perpetual state of almost kissing, only blocked by the microphone. And doubtless, no one at Town Hall last night will forget the moment when Matsson perfectly hit the high note in “be THEEEEEEE king of Spain!” and then practically fell to the floor, as if he was punched in the stomach to get out that one note. But mostly, people will remember that stare and that poise. The Tallest Man, indeed.