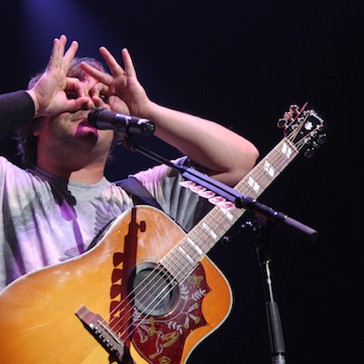 I never thought I’d be compelled to write something intelligent about a Tenacious D show. Then again, I never thought I’d see Tenacious D live. But, when their Hammerstein gig was announced, something inside me insisted I go. Perhaps I wanted to be in the same room as Jack Black. (There’s nothing wrong with that, right? Musicians are technically celebrities, but he’s a movie star, a different breed altogether.) Maybe I wanted to see how much I’ve grown up since the days of jamming to “Tribute” with my high school band. Or, fine, maybe I liked The Pick of Destiny. And maybe I had a huge shit-eating-grin on my face during “Tribute”, and maybe it is still hilarious. Yeah, I guess that’s why I went, and why I’m struggling to say anything moderately intelligent about a Tenacious D show that isn’t just along the lines of “It’s really fun to sing ‘Fuck Her Gently’ in a room filled with a bunch of fellow geeks.” (Spoiler alert: It is)

On Tenacious D’s new record, Rize of the Fenix, specifically on the song “They Fucked Our Asses”, they make a reference to “keeping their indie cred.” But, does a band with a giant inflatable Phoenix/Penis backdrop really have any indie-cred? Probably not. Does a band like Tenacious D need any indie cred? Definitely not. This was the kind of show where a bunch of apathetic concert goers could do nothing but ruin the show. Sure, the crowd might not have been dressed as well as when the band made a stop at Sasquatch! earlier this summer, but they were the right kind of crowd. Normally, a shirt with any sort of video game reference or faux-nerd regalia would make me scoff, at Tenacious D’s show this was welcome. The kids decked out in Batman masks/capes, with Mario characters on their shirt, and pants with chains (they still exist) probably raged the hardest to Tenacious D’s set, even inciting impressive mosh-pits during “The Metal” and “Deth Starr”.

As expected, Black’s voice was on, from his gibberish vocalizations to his wannabe Ronnie James Dio screams. Theatrics were aplenty, with staged moments of Kyle Gass quitting the band before “Dude (I Totally Miss You)” and “Kyle Quit The Band”, costumed antics during everything else, and the Phoenix (or, is it Fenix?) shot sperm shaped confetti for the finale. Songs that normally required a movie-oriented narrative like “Kickapoo” and “Beezleboss” still kicked ass with the members of the touring band playing different characters, and there was even a perfectly D’d medley of The Who tunes. Sure, the most variation you’ll get in a song is Black adding “motherfucker” between random syllables, but there’s still something about seeing The D live that makes the show stand out.

Having said that, I never want to see the show again; there’s absolutely no point. It’s not that I know what to expect or that it’s embarrassing, or that there’s anything remotely wrong with the show. It’s just that a Tenacious D gig is a memorable one-time experience, whether for the 14-year-old newcomer who just stumbled onto “Kielbasa” or the 25-year-old whose side still aches from laughter every time he hears it. It’s rare to find a comic that tours with the same material again and again. That’s the difference here. The D will always play “Kielbasa” and while it’ll always draw laughs, it’ll never have that first-time magic. Personally, I’d rather not fuck with that — no matter how gently.