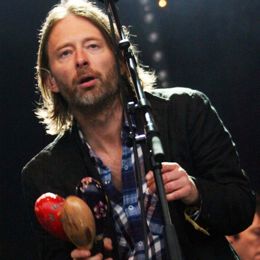 Perhaps the Alt-rock version of Watch the Throne is coming to fruition: During their performance at Bonnaroo last night, Radiohead hinted at an upcoming collaboration with Jack White.

“This song is for Jack White,” Yorke told the crowd prior to their performance of “Supercollider.” “We saw him yesterday. A big thank you to him, but we can’t tell you why. You’ll find out.”

A logical assumption is that Radiohead stopped by White’s Third Man Records in Nashville on their way to Bonnaroo, and just like Beck, Tom Jones and Laura Marling have done previously, the band recorded a one-off single for the label’s Blue Series. That may also explain why Jack was conspicuously absent from the festival’s lineup this year.

Below, you can watch a replay of Radiohead’s entire Bonnaroo performance (Yorke teases the collaboration at the 1:38:48 mark.)