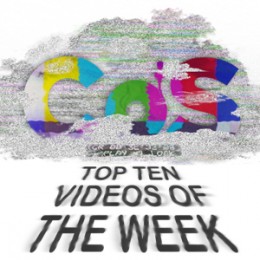 “A little nonsense now and then is relished by the wisest men.” -Willy Wonka

The Beach Boys  Thats Why God Made the Radio

The video for the titular track off The Beach Boys’ reunion album is packed with enough sun-soaked blissful footage to make you want to pick everything up and move to SoCal.

First Aid Kit nabbed legendary Swedish actress Ewa FrÃ¶ling for their latest video. Casual film viewers might remember FrÃ¶ling from the 2009 Swedish adaptation of The Girl with the Dragon Tattoo. Film historians, however, will remember her from such timeless classics as Ingmar Bergman’s Fanny and Alexander.

Underestimate the girl is right. The one-time goody two shoes goes full on Riot grrrl in her latest music video. Sporting two-toned hair, a bindi, and a newly-found punk attitude, Nash all but looks like she’s on her way to a Kathleen Hanna lookalike contest.

One of the most 90’s things you’ll likely see all week.

The Mars Volta  The Malkin Jewel

There’s not really much to this epic 15-minute clip from The Mars Volta. Simply watching the band’s weighed down space rock noodling in action is captivating enough to keep you entranced for the entire duration.

Mischa Barton is not having a good day. This is due mostly to Noel Gallagher, who makes off with her dress that gets caught in the door of his taxi cab.

Kudos to all of you out there who saw “Shia LeBeouf” and “NSFW” and still clicked the play button.

And I thought my electric bill was high. I can’t imagine how much Simian Mobile Disco racked up after shooting this illuminating video.

If you ever hear strange noises coming from Summer Camp’s tour bus, call the cops.

Twin Shadow’s George Lewis Jr. always seemed like a pretty chilled out dude, at least if you go by his music. However he’s anything but chill in his latest music video, which sees him brutally strangle a masked henchmen.