Video: Against Me! and Joan Jett – “Androgynous” (The Replacements cover) 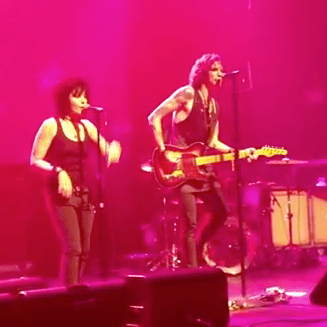 June 8th was the one month anniversary of Against Me! lead singer Laura Jane Grace (formerly Tom Gable) coming out as transgender. At the band’s gig that night opening for The Cult at New York’s Terminal 5, they marked the occasion with an apropos cover of The Replacements’ “Androgynous alongside original riot grrrl Joan Jett. Grace and Jett traded vocals during the number, and Grace’s unremitting smile was the song’s lyrics manifest: “She’s happy with the way she looks / she’s happy with her gender.” Watch the replay below (via Stereogum).