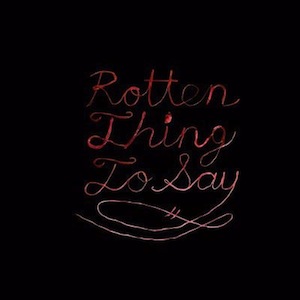 Sometimes, it feels like dangerous rock and roll has truly gone the way of the buffalo. And then an album comes along that makes you want to put your head through a wall, buy a motorcycle, and/or get a face tattoo.

Canada’s Burning Love have created such an album with Rotten Thing to Say. Led by Chris Colohan, formerly of Cursed, Left for Dead, and the Swarm, Rotten Thing to Say sees Colohan’s latest group hit their stride in the realm of rock-influenced punk. However, unlike most hardcore-punk bands with a rock and roll twist, the sound is never a novelty; the guitar solos aren’t phoned-in, the grooves are never awkward, and Colohan’s trademark vitriol simply oozes from the tracks with all of the nihilistic rage expected from the man who some consider to be one of the best lyricists to ever strangle a microphone.

Produced by Converge guitarist and extreme music producer extraordinaire Kurt Ballou, Rotten Thing to Say delivers the band’s scathing reports with a vastly improved level of clarity from prior efforts while retaining all of their trademark grit. The album begins with a feedback-riddled introduction that pays an unintentional homage to Turbonegro and proceeds to extract every last ounce of adrenaline from your unsuspecting glands through the course of the record’s 35 minutes. “Karla” is a standout track, driven by barbaric drumming, fuzz-infested bass, and relentless salvos of lead guitar and power chords. The track tells of the crimes of infamous Canadian serial killer Karla Homolka, a series of atrocities that match the violence of the song perfectly.

Other notables include “Pig City II”, a four-on-the-floor stomp that beckons your hand toward the volume knob, and “Broken Glass”, a song that bares Colohan’s anger while shedding some light on the events that found Cursed broke and stranded in Europe, thus ending the band.

Between the uncommonly good riffs, Colohan’s lyrical precision and inimitable snarl, and Ballou’s intense production, Rotten Thing to Say manages to fuse Black Flag’s rage with the Stooges’ menace, adds a dash of metal, and comes out with a visceral record that will surely leave the listener with a sore neck.