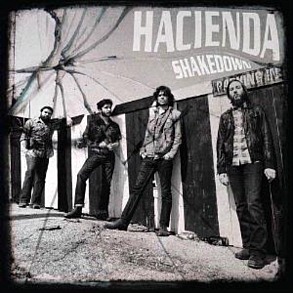 “What about the plans we made,” Hacienda asks on the alluring chorus to opening track “Veronica”. On their latest album, Shakedown, the San Antonio collective embraces its own influences without foregrounding them, which means that despite the prevalence of anxious, hyper self-aware rock albums as of late, some bands may not think twice about working in 30-year-old styles and forms. Sometimes, a good hook is enough.

There are plenty of those on Shakedown, and the band was wise enough to frontload the first half of the album with the strongest tracks, the ones that don’t need to beg to get a sing-along (a trap that a few tracks here fall into as the album progresses). The aforementioned “Veronica” sounds like a power-pop band’s take on a Phil Spector girl group, but two songs later, Hacienda is doing a fine impersonation of The Strokes. Then there’s “Savage”, which is danceable enough to sound like the great dance-pop plurality in indie rock these days, but there’s also a little line in “Savage” that makes one think twice: “my heart is racing, finally racing.”

That word, finally. “Savage” could be some sort of triumph: it could be a song about rock and roll’s Saturday Night, or letting loose while you still have the time: “Let’s be savage ‘til the feeling’s gone” goes the chorus. Instead, it’s a song about trying, or maybe forcing your heart to feel like it’s racing until you might want to sleep. “I wanna get back, please help me get back,” the song crashes at the line “let’s be savage.”

Shakedown is a record of ifs and maybes, of non-committals and conditionals. Three of the ten song titles are negative commands, and that doesn’t seem like a coincidence. It feels like there’s a lot of miscommunication in Shakedown, like killer pop hooks make for a good party, but not much more. The lyrics throughout the album are pleasantly disjointed and at times non-sensical. Meanwhile, the verses act drunk and scared, like they need the choruses to help them figure out what they really want to say. Often that ends up being something a girl may not want to hear (e.g. “Don’t turn out the light” or “Don’t leave me waiting” or “Don’t you ever”). Other times, it just makes for a good chorus, something that might get stuck in your head for a couple of days.