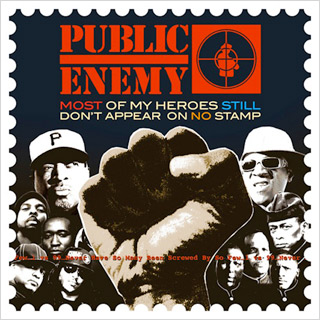 It’s somehow fitting that less than three months after the tragic passing of Beastie Boy Adam “MCA” Yauch, former Def Jam labelmates and fellow old-school hip-hop icons Public Enemy have dropped Most of My Heroes Still Don’t Appear on No Stamp, their first of two albums slated for 2012 release. On the surface, Beastie Boys and Public Enemy couldn’t be more different: rap’s Peter Pan pranksters (“fight for your right to party”) and the Black Panthers of hip-hop (“party for your right to fight”). But the two acts share the bond of what Public Enemy front man Chuck D calls “the senior circuit”—groups who have avoided trends in hip-hop over the years in favor of building strong, reliable brands as live performers, album droppers, and crews. It’s part of the reason why golden age records like Paul’s Boutique and It Takes a Nation of Millions to Hold Us Back still spin fresh nearly a quarter-century later. And it’s the reason why Most of My Heroes…, rolling with that familiar PE style (from crosshairs logo and sloganeering cover art to aggressive beats and social commentary), hits nearly as hard as ever. After all these years, the PSA is still a party.

Regular PE crew Chuck D (a.k.a. The Hard Rhymer), hype man extraordinaire Flavor Flav, and Professor Griff return with several longtime PE producers (Gary G-Wiz, DJ Johnny Juice, CDOC) and a slew of guests (Brother Ali, Bumpy Knuckles, D.M.C.) on Most of My Heroes…, a title that plays off a lyric from Public Enemy’s seminal track “Fight the Power” (best remembered as the anthem of Spike Lee’s 1989 joint Do the Right Thing). In 2012, the powers Public Enemy set their sights on are a society, corporate world, and all-glitz-no-substance rap game out of touch with common folks struggling to make ends meet. Standout “Catch the Throne”—a polemic against elitism in both hip-hop and society—delivers this dose of perspective with classic PE blaze, Flav echoing and punctuating Chuck’s bark on rants “against those standing in mansions/ Spittin’ at us from up that higher ground/ Feed the people/ Fight the power/ Fix the poor / But that 1% done shut the door.”

Most of this record falls into tried-and-true PE formulas, but there’s no dust or rust to be found on the album’s top tracks. Public Enemy deliver their signature style with an angst and tenacity typical of men half their age, combined with the wisdom of 25 years in the rap game. Opening track “Run Til It’s Dark”, a classic PE barnburner, funnels freight train beats and guitar solo interludes into a chaotic, anthemic chorus, shredded by DJ scratches. “Hoovermusic” revamps the rap-rock of New Whirl Odor’s harder tracks, Chuck D broadcasting the score (“Tell me why do y’all love it?/ Songs meant to send you to prison/ Bids to influence a million and a half kids”) atop buzz-saw guitars and slamming percussion. Funky drums and brass—courtesy of producer Gary G-Wiz—give a bucking, old-school feel to “Get Up Stand Up”, the record’s best track. Guest vocalist Brother Ali drops an illusive, rapid-fire verse that bobs and weaves, a vocal style that fits like a boxing glove alongside Chuck D’s knockout punches and Flav’s incessant jabs. “But the mighty PE is what birthed Ali/ So, what you gonna think come after me?” asks Ali in one of several nods to Public Enemy’s influence on younger generations.

Most of My Heroes… does contain a few cuts completely out of left field. The fragmented “I Shall Not Be Moved”, a late-night studio experiment between Chuck D and Gary G-Wiz, features Chuck’s vitriolic verses partitioned by pauses, asides, and instrumentals and closes repeating the unlikely line “On Wi-Fi got you gaggin’ on Gaga.” Somehow this track works, despite the fact that it intentionally kills the momentum that most PE songs rely upon. Other surprise cuts aren’t as successful. The legendary Darryl “D.M.C.” McDaniels (of Run-D.M.C. fame) trades straightforward verses with Chuck on the slower-tempo “RLTK”, but the track fails to find its groove with its foot off the accelerator. Closing numbers “Fassfood” and “WTF?” jettison the group’s longstanding frontman/sidekick vocal dynamic, with Chuck and Flav instead sharing equal mic duties. Neither track stacks up to the record’s better cuts, but it’s hard not to smile as Chuck and Flav each have their say, side by side, atop the warm, upbeat (think “He Got Game”) arrangement of “WTF?”, which Chuck D says might as well stand for “What the Flav?”

This year marks the 25th anniversary of Public Enemy as a hip-hop group. That quarter-century has seen them on top, under fire, and everywhere between. But with new material as hard-hitting as the choice cuts on Most of My Heroes Still Don’t Appear on No Stamp, old-school hip-hop fans can rest assured that rap’s senior circuit is alive and strong. Even without one of Flavor Flav’s giant clocks, Public Enemy still know what time it is.

Essential Tracks: “Get Up Stand Up”, “Catch the Thrown”, and “Run Til It’s Dark”