R. Kelly – Write Me Back 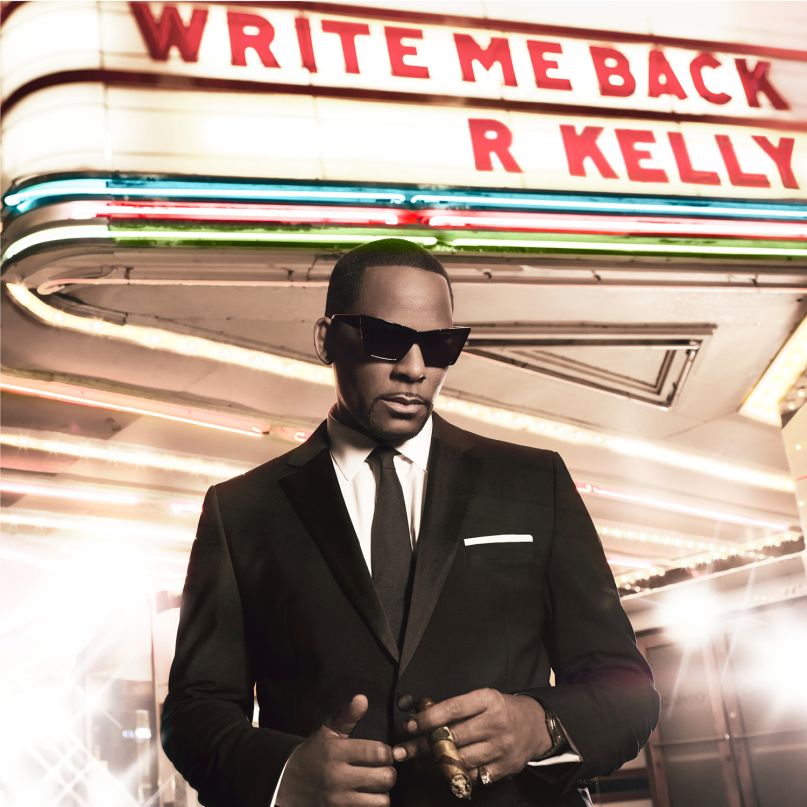 R. Kelly has always existed in a weird buffer dimension. Super talented with an evocative voice, years of Zorro masks, and sex acts with invisible women have made it difficult to always take him seriously. As a result, he’s been able to readily switch between the wackiness and serious emotional displays, a trait which has always made for entertaining music that hit just below its true potential. With the release of his 11th studio album, Write Me Back, Kelly has found a balance between both sensibilities, and forged an album that’s a definitive career landmark.

To offer his good-timey aesthetics space without ruining the heartache of the remaining tracklist, Kelly utilizes jams like “Feelin’ Single” and “All Rounds On Me”. The former is Kelly at his most typical, responding to infidelity by going out and committing the very act himself. Even the beat, that gentle, summery guitar ripped from the Al Green back catalog, is as familiar as Kelly singing about bottle service. Still, there’s an enthusiasm and a general sense of ease to his tone, his decision less a plot, and more a natural reaction to pain that anyone would have.

The post-fight make-up sex/partying of “All Rounds On Me” feels contrived, yet its end result is a profound admission from Kelly: he’s committed to love despite the imperfections. What’s even more interesting is that the song’s waves of passion, alive thanks to the old-school, blazing, rockabilly guitar, create the sense that this process will continue on for years to come. That organic, fluid sense of reality is something missing from so many of Kelly’s hits.

As much as he likes to partay, Kelly quite possibly loves the act of love even more. Specifically, he wants to celebrate the warm, gushy feelings that accompany it, as well as the amazing benefits of a truly dedicated partner. Though his career is filled with plenty of enjoyable creations that do just that, “Love Is” and “Lady Sunday” are uniquely understated. The former is a disco take on the smooth-as-silk croon of Barry White, with Kelly breaking love down as a simple bond between two people who willingly endure both good and bad. More than a more genuine portrait of love, it’s utterly uncomplicated, relying on the warm, soulful undertones of Kelly’s voice and a simple electric piano groove to get its message across.

“Lady Sunday” is perhaps even less complicated of a construct. Once more, White serves as a musical template, resulting in grand piano and bongo parts that create a sense of intimacy, like they’re being played in the living room of some grand New York loft for one lucky lady. Kelly serenades his lover, defining her as his source of joy and a shot of life when he’s in the dumps (or, as he cheekily emotes, “When I feel drained, her love is like a fountain”). Again, he’s never been overwhelmingly intricate, but pulling back as far as he has, to reveal emotions that feel almost child-like in their scope, lends an air of true universality.

All that’s musical foreplay for “Believe In Me” and “When A Man Lies”, where true vulnerability and brevity result in the most captivating ballads of Kelly’s career. “Believe In Me” goes ultra spiritual, exploring Kelly’s need for faith as he embarks on a jaunt that’s bound to test his very moral fiber. Yet what makes the earnest declarations ring truest is the music, a departure from his beloved R&B toward realms of some bass-ier, Enya-esque adult contemporary. It’s unlike many other of his choices in the past, yet the ease at which he acclimates is just another example of his prowess when he’s most focused.

“When A Man Lies” is this defining album’s apex, a veritable emotional climax. It’s as somber as anything Kelly has ever done, skillfully mixing the restraint of gospel with the minimalized chug of R&B swagger. Kelly’s performance is moving and earnest, preaching how lying “pierces the very soul of that woman” you’ve pledged yourself to. But in a cheesy twist, Kelly sings, “Mirror, I’m talking to you,” revealing himself as the no-good cheater. Logic should dictate that this song, this meaningful, heartfelt display of honesty, should be harmed by the addition of such musical gouda, yet it’s simple enough (not to mention delivered with plenty of conviction) to make it the most revealing and satisfying line on the album.

The song, and by extension the LP, is a clear example of growth on Kelly’s part, showcasing that he’s learned to unite both sides of his personality in new ways that solidify his status as a modern-day great. And nothing, not even chapter 81 of Trapped in the Closet, could ever change that.

Essential Tracks:  “When A Man Lies”, “Love Is”